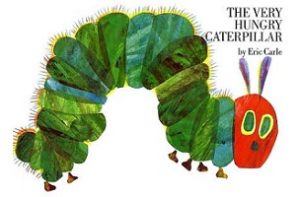 New York, NY – Eric Carle’s The Very Hungry Caterpillar has eaten its way into the hearts of millions of children since it was published in 1969. Today, the iconic picture book is available in e-book for the first time. Featuring an audio reading by Eric Carle himself, the e-book follows the beloved green caterpillar as he eats his way through each day of the week and ultimately transforms into a beautiful butterfly. This is the first book written and illustrated by Eric Carle to be available in e-book format.

Eric Carle said, “I still consider myself a beginner at learning how to use the computer – but I can see how technology and the development of apps, e-books and computers are a part of the evolution of our world. It has been this way since the very beginning. Cave men once wrote stories in pictures on stone; later the book was invented and so on and so forth. So change is inevitable. And I am very pleased and honored that my work is being enjoyed in different formats by so many readers around the world.”

Jen Loja, President, Penguin Young Readers commented, “We are delighted to bring this classic into a brand new e-book format.  For over 45 years Eric Carle’s caterpillar has been teaching children and making them giggle and we’re thrilled to give this beloved story yet another new home.”

March 20th is designated “The Very Hungry Caterpillar Day.” Every year, on this first day of spring, teachers, librarians, booksellers, and fans of the book around the country are encouraged to read and celebrate the metamorphosis of this eager, insatiable caterpillar, whose mystical transformation has entertained and enchanted generation after generation of young readers.

Eric Carle (www.eric-carle.com) has illustrated more than seventy books, many best sellers, most of which he also wrote. To date, more than 138 million copies of his books have sold around the world. In 2002, Eric and his wife Barbara opened The Eric Carle Museum of Picture Book Art (www.carlemuseum.org) in Amherst, MA, a 40,000 square foot space dedicated to inspiring a love of art among children by introducing them to picture book art by renowned artists from around the world. Visit (www.carlemuseum.org) to find out more about The Eric Carle Museum of Picture Book Art in Amherst, MA. Eric Carle divides his time between the Florida Keys and the mountains of North Carolina.

You can download images of the author and e-book here.