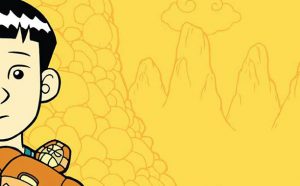 American Born Chinese received popular and critical acclaim as the first graphic novel to be a finalist for a National Book Award and the first to win the American Library Association’s Printz Award. The book follows young Jin Wang’s journey as a Chinese-American student in a predominantly white neighborhood.

Ten years after his novel’s initial publication, Yang is encouraged by the growth of the graphic novel form and the movement towards more diverse storytelling.

Things are definitely moving in a good direction. It seems like there’s a large conversation about diversity in American storytelling. Not just comics, but in movies and TV and books. I think it’s an important discussion to have. (Entertainment Weekly)