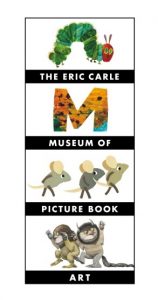 Amherst, MA (August 24, 2016) – The Eric Carle Museum of Picture Book Art celebrates the 50th anniversary of the beloved story that launched Eric Carle’s picture-book career—Brown Bear, Brown Bear, What Do You See? by Bill Martin Jr—with the exhibition Brown Bear Turns 50. The exhibition, on view from September 13, 2016 through March 19, 2017, kicks off a year of special events honoring the children’s classic, one of the best-selling picture books of all time. Support for the exhibition and programs has been generously provided by Macmillan Children’s Publishing Group.

Published in 1967, Brown Bear, Brown Bear, What Do You See? had an immediate appeal to children and adults alike. Martin’s rhythmic call-and-response text builds anticipation at each turn of the page, while Carle’s bold graphics and colorful parade of animals encourage learning and imagination. Brown Bear has been translated into 31 languages—from Arabic to Vietnamese—and has sold more than 16 million copies. In addition to the original 1967 book, Carle re-illustrated editions in 1970, 1984, and 1992.

In Brown Bear Turns 50 artwork from every page of the famous book will be on display. One of only two surviving collages from the 1967 edition—Brown Bear himself—has been faithfully restored and is on view for the first time. The exhibition also includes a medley of Carle’s collages from the three additional “bear books” he worked on with Martin: Polar Bear, Polar Bear, What Do You Hear? (1991), Panda Bear, Panda Bear, What Do You See? (2003), and Baby Bear, Baby Bear, What Do You See? (2007). “We’re excited that Eric Carle’s original artwork from 1967 is on view,” says Chief Curator Ellen Keiter. “By displaying his collages from various editions of the book—for example, the goldfish from 1967, 1984, and 1992—visitors to the exhibition can trace the changes in Carle’s compositions and materials over the years.” Keiter adds, “We also have a large selection of foreign language books on display, signifying the world-wide impact Brown Bear has had.” In a separate endeavor, The Carle has also sent the book’s famous characters to the main streets and outdoor spaces of its hometown in Amherst with a special outdoor public exhibition, Brown Bear Everywhere, on view through October 9, 2016. Fourteen high-quality reproductions of Carle’s original collage illustrations are currently on display at some of Amherst’s popular restaurants, schools, and recreational sites.

Carle never planned on a career in children’s books. He graduated from art school and, for over a decade, worked in New York City as an art director and a freelance graphic designer. Everything changed in the late 1960s when Martin, a respected educator and author, noticed one of Carle’s collage advertisements featuring a red lobster. “The art was so striking,” said Martin, “that I knew instantly I had found the artist to illustrate my next book.” That book was Brown Bear, Brown Bear, What Do You See? and it transformed Carle’s life—today he is one of the most acclaimed and beloved illustrators of our time.

In addition to the outdoor and Museum exhibitions, The Carle has launched a special page on its website www.carlemuseum.org/brownbear containing teacher activities, a family activity kit, special photographs, Brown Bear fun facts, and a video of Eric Carle reading Brown Bear, Brown Bear, What Do You See?.  In celebration of the anniversary, Macmillan Children’s Publishing Group will be releasing the Brown Bear and Friends books in a number of new editions and formats, including a lift-the-tab board book and a four-book gift set. More information about the 50th anniversary publishing program is available at www.brownbeareverywhere.com/books.

2:00 pm – Auditorium Presentation: A Look Back at Brown Bear

Eric Carle uses every color of the rainbow in the book Brown Bear, Brown Bear, What Do You See? Museum visitors can make their own colorful creations with paper scraps, magazine clippings, glue, and scissors.

About The Eric Carle Museum of Picture Book Art:

Eric Carle and his wife, the late Barbara Carle, co-founded the Museum in November 2002. Carle is the renowned author and illustrator of more than 70 books, including the 1969 classic The Very Hungry Caterpillar. Since opening, the 40,000-square foot facility has served more than half a million visitors, including 30,000 schoolchildren. The Carle houses more than 13,000 objects, including 6,600 permanent collection illustrations. The Carle has three art galleries, an art studio, a theater, picture book and scholarly libraries, and educational programs for families, scholars, educators, and schoolchildren. Educational offerings include professional training for educators around the country and Master’s degree programs in children’s literature with Simmons College. Museum hours are Tuesday through Friday 10 a.m. to 4 p.m., Saturday 10 a.m. to 5 p.m., and Sunday 12 noon to 5 p.m. Open Mondays in July and August and during MA school vacation weeks. Admission is $9 for adults, $6 for children under 18, and $22.50 for a family of four. For further information and directions, call (413) 559-6300 or visit the Museum’s website at www.carlemuseum.org