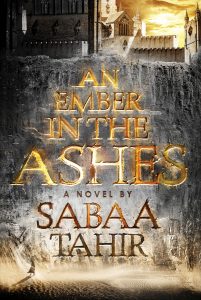 New York, NY – Razorbill, an imprint of Penguin Young Readers, has acquired books three and four in Sabaa Tahir’s critically-acclaimed, internationally bestselling ‘An Ember in the Ashes’ series. Tahir’s debut novel, An Ember in the Ashes, has been likened to such cultural touchstones as Harry Potter, The Hunger Games and Game of Thrones and is widely regarded as one of the best books of 2015. It won the first ever People’s Choice Best Fantasy Book Award, was named the Best YA Book of 2015 by both Amazon and Bustle.com, and was featured on ten other “Best of 2015” lists. On August 30th, Penguin will publish the highly-anticipated sequel, A Torch Against the Night, which has already received two starred reviews and been dubbed “most spectacular sequel” on Entertainment Weekly’s Must List.

Ben Schrank, Razorbill publisher, said: “We’re thrilled to publish the complete four book arc that started with An Ember in the Ashes. Sabaa Tahir only gets better from book to book and we eagerly await the next installment of her journey.”

Tahir said: “For years, I’ve carried my characters’ stories in my head. I am so, so happy that I now get to share those stories, in their entirety, with readers everywhere.”

Set in a world inspired by ancient Rome, An Ember in the Ashes is the story of Laia, a girl who will do anything to save her brother from a brutal fate – including going undercover as a slave at Blackcliff, the military academy where the Martial Empire trains its force of elite assassins, the Masks – and Elias, the school’s finest soldier, who wants nothing more than to be free of the tyranny he’s being trained to enforce.The Washington Post raved, “This novel is a harrowing, haunting reminder of what it means to be human — and how hope might be kindled in the midst of oppression and fear.” The Huffington Post wrote, “An Ember in the Ashes glows, burns, and smolders–as beautiful and radiant as it is searing.”

A Torch Against the Night takes readers into the heart of the ruthless Martial Empire as Laia and Elias fight their way north to liberate Laia’s brother from the torturous chambers of Kauf prison. Hunted by Empire soldiers and haunted by their pasts, Laia and Elias must outwit their enemies and confront the treacherousness of their own hearts. In a starred review, Booklist raves, “Tahir proves to be a master of suspense and a canny practitioner of the cliffhanger, riveting readers’ attention throughout. . .  [An] action-packed, breathlessly paced story.”

In books three and four, war looms ever closer, the Scholar revolution burns brighter, and we follow Laia, Elias, and Helene as they battle the dark forces arrayed against them—from the vengeance-obsessed Nightbringer to the increasingly cunning Commandant.  Even as they fight for their lives and their people, the three will grapple with the burden of shameful family legacies—and will learn first-hand the perils of falling in love under the shadow of the Martial Empire.

Sabaa Tahir grew up in California’s Mojave Desert at her family’s eighteen-room motel. There, she spent her time devouring fantasy novels, raiding her brother’s comic book stash, and playing guitar badly. She began writing An Ember in the Ashes while working nights as a newspaper editor at the Washington Post, where she covered the international desk and stories on child soldiers and other atrocities in Africa and the middle east. All of these experiences informed elements of her book. She likes thunderous indie rock, garish socks, and all things nerd. Sabaa currently lives in the San Francisco Bay Area with her family.