Scholastic Announces Sales of More Than 3.3 Million Copies of ‘Harry Potter and The Cursed Child’ Parts One and Two 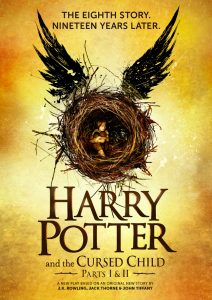 New York, NY — Harry Potter and the Cursed Child Parts One and Two script book, the eighth Harry Potter story by J.K. Rowling, John Tiffany, and Jack Thorne, published in the U.S. and Canada by Scholastic has sold more than 3.3 million copies in North America to date.

Scholastic announced a first printing of 4.5 million copies of Harry Potter and the Cursed Child Parts One and Two script book, and retailers reported fast-paced, record-breaking pre-sales leading up to the release date with over 2 million copies sold in the first two days alone. The script book went straight to #1 on USA Today and New York Times bestseller lists.

“We are delighted to see the sustained enthusiasm for Harry Potter and the Cursed Child Parts One and Two which has also sparked more interest in the seven previously published Harry Potter books,” said Ellie Berger, President, Scholastic Trade.

On August 4, 2016 Harry Potter and the Cursed Child producers Sonia Friedman, Colin Callender and Harry Potter Theatrical Productions released 250,000 new tickets for sale taking bookings at the Palace Theatre through to December 10, 2017. These tickets sold out on the day however, returned tickets and other late release tickets will become available daily. A new booking period will be announced later this year for performances beginning December 13, 2017. www.harrypottertheplay.com/ticket-information

The first seven Harry Potter books, published by Scholastic in the U.S. between 1998 and 2007, have sold more than 160 million copies in the U.S., over 450 million copies worldwide, and are distributed in more than 200 territories, translated into 79 languages, and have been turned into eight blockbuster films.

Scholastic Corporation (NASDAQ: SCHL) is the world’s largest publisher and distributor of children’s books, a leading provider of print and digital instructional materials for pre-K to grade 12, and a producer of educational and entertaining children’s media. The Company creates quality books and ebooks, print and technology-based learning programs, classroom magazines and other products that, in combination, offer schools customized solutions to support children’s learning both at school and at home. The Company also makes quality, affordable books available to all children through school-based book clubs and book fairs. With a 96 year history of service to schools and families, Scholastic continues to carry out its commitment to “Open a World of Possible” for all children. Learn more at www.scholastic.com.