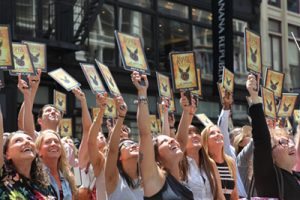 New York, NY – More than 300 Harry Potter fans formed a massive flash mob or “Muggle Mob” today, taking over Broadway in front of the Scholastic headquarters building in New York City, just 10 days before the highly anticipated release of the eighth Harry Potter story, Harry Potter and the Cursed Child Parts One and Two. The fans, all Scholastic employees and their children, flooded onto the street reading from a favorite Harry Potter book and stopping traffic in the busy SoHo area. At the culmination of the estimated two-and-a-half minute event, the fans lowered their books and raised up paddles showing the cover ofHarry Potter and the Cursed Child Parts One and Two, drawing cheers throughout the neighborhood. As the crowd dispersed, “Muggle Mob” participants handed out their Harry Potter books from the Harry Potter series 1-7 to lucky passersby, sharing the gift of books and reading. Scholastic released photos and video footage from the flash mob which can be found below.

“Scholastic introduced Harry Potter to readers of all ages nearly 20 years ago. What better way to celebrate the release of the eighth story and start the countdown to the biggest publishing event of the summer than to gather a flash mob of dedicated Harry Potter fans eager to share their love of books and reading,” said Ellie Berger, President, Scholastic Trade. “We could feel the excitement and anticipation as hundreds of people were reading and one of the busiest streets in Manhattan came to a standstill. It was an incredible moment and we can’t wait until July 31st!”

Scholastic (NASDAQ: SCHL), the world’s largest publisher and distributor of children’s books, published the seven Harry Potter novels in the U.S. between 1998 and 2007. The Harry Potter books have sold more than 160 million copies in the U.S., over 450 million copies worldwide, are distributed in more than 200 territories, translated into 79 languages, and have been turned into eight blockbuster films. In addition to publishing Harry Potter and the Cursed Child Parts One and Two script book, Scholastic also announced that it will also publish the original screenplay of the Fantastic Beasts and Where to Find Them film written by J.K. Rowling this November. For more information, visit http://mediaroom.scholastic.com/harrypotter.