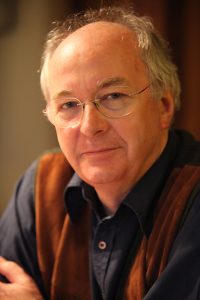 NEW YORK, NY — Scholastic, the global children’s publishing, education and media company, will publish Philip Pullman’s first original graphic novel, illustrated by Fred Fordham in 2017. The full-color graphic novel, The Adventures of John Blake: Mystery of the Ghost Ship, for ages 8-12 will be published jointly by David Fickling Books and Graphix, both imprints of Scholastic, in North America in June 2017.

World rights for the book were acquired earlier this year by David Fickling Books in the UK, which currently is serializing the story in The Phoenix, a weekly children’s publication available in the UK via newsstands and by subscription. The serialized comic will be collected into the full-color graphic novel, to be published simultaneously in the UK, US, and Canada in June 2017.

“John Blake is a story that’s close to my heart,” said Philip Pullman. “In Fred Fordham, John and the crew of the mysterious schooner The Mary Alice have found the ideal illustrator, and I’ve loved watching the story develop in his hands. The joy of the setting and the characters for me is that they’re capable of infinite variations. The Mary Alice can roam throughout time, past, present, and future, and anywhere on the oceans of the world. I hope readers will enjoy it as much as we have!”

“We are so proud and thrilled to be bringing Philip Pullman’s brand new hero and astonishing adventure, out of the pages of The Phoenix comic, to all the readers of North America,” said David Fickling, Publisher, David Fickling Books. “Can anything be better than to sail in the company of Fred Fordham, a blazing new comic strip talent, and to have Philip at the helm, The Captain of Story himself!”

“What an honor to welcome the brilliant storyteller Philip Pullman to the Graphix list. And to partner with the The Phoenix and David Fickling Books—publishers at the forefront of creating acclaimed comics and books for young readers in the UK—makes this collaboration even more exciting,” said David Saylor, Vice President Creative Director, Trade Publishing, and founder and Editorial Director of Graphix.

About The Adventures of John Blake: The Mystery of the Ghost Ship
Trapped in the mists of time by a terrible research experiment gone wrong, John Blake and his mysterious ship are doomed to sail between the centuries, searching for a way home. In the ocean of the modern day, John and the crew rescue a shipwrecked young girl his own age, Serena, and promise to help.

But returning Serena to her own time means traveling to the one place where the ship is in most danger of destruction. The all-powerful Dahlberg Corporation has an ambitious leader with plans far greater and more terrible than anyone has realized, and he is hot on their trail. For only John, Serena, and the crew know Dahlberg’s true intentions, and only they have the power to stop him from bending the world to his will…

About Philip Pullman
Philip Pullman is the internationally acclaimed author of many books for children and adults. His trilogy His Dark Materials has been published in more than forty languages, has sold close to 17.5 million copies worldwide, and won innumerable awards and accolades. The Golden Compass (Northern Lights in the UK) was named an “All-Time Greatest Novel” byEntertainment Weekly and a “Top 100 Book of All Time” by Newsweek. In 2008, The Times(UK) named Pullman as one of the 50 greatest writers since 1945.

About Fred Fordham
Fred Fordham was born in 1985 and grew up in North London. He studied Politics and Philosophy at Sussex University alongside working as a portrait painter and occasional tutor. Here he discovered comics after reading Marjane Sartrapi’s Persepolis. This book sparked an interest in the form generally but particularly in the French Bande Dessinee tradition. His first graphic-novel, Nightfall, was published in France by Editions Delcourt and launched at the Salon Du Livre in Paris in 2013. He has also written and illustrated strips for David Lloyd’s online comics-art magazine, Aces Weekly, and worked as an illustrator for The Phoenix.

About David Fickling Books
David Fickling is an acclaimed editor and publisher based in the UK. Scholastic US welcomed David Fickling Books as a new imprint in June 2015. Over the years Fickling has published some extraordinary books like Phillip Pullman’s The Ruby in the Smoke and His Dark Materials trilogy, John Boyne’s The Boy in the Striped Pajamas, Mark Haddon’s The Curious Incident of the Dog in the Night-Time, Jenny Downham’s Before I Die, and Andy Mulligan’s Trash.

About The Phoenix
In 2012 David Fickling launched a weekly story comic for children called The Phoenix, filled with beautiful and original artwork, exciting stories, and featuring no advertising. The comic recently celebrated its 200th issue, becoming the first independent comic in the UK to do so since 1969. It has also been voted No. 2 in Time Magazine’s global list of “Top Comics and Graphic Novels.”

About Graphix
In 2005 Scholastic launched Graphix with the publication of the full-color edition of BONE #1: Out from Boneville. Graphix is dedicated to publishing engaging, age-appropriate graphic novels for children and teens. Supported by librarians, teachers, and most important, kids, Graphix titles have become bestsellers around the globe and continue to receive awards and critical acclaim including multiple Eisner Award wins and nominations, a Stonewall Book Award (Drama), a Boston Globe-Horn Book Award Honor (Smile), an Edgar Allan Poe nomination (The Lost Boy), and 20 New York Times bestsellers to date.