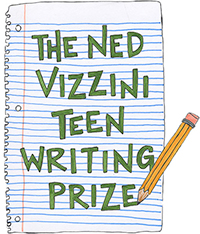 The first-ever prize was presented on June 7 at the Brooklyn Public Library. The poetry winners were Kat Snoddy, Odelia Fried, and Lucy Berry. The prose winners were Stina Trollbäck, Adil Gondal, and an anonymous writer.

YA author Ned Vizzini, known for his 2006 novel It’s Kind of a Funny Story, who committed suicide in 2013, is being honored with a new award that celebrates emerging young authors. Vizzini grew up in Brooklyn’s Park Slope neighborhood, and was a frequenter of the central branch of the Brooklyn Public Library. The Library is stewarding the Ned Vizzini Teen Literary Prize to both remember the author and recognize young writers. (Publishers Weekly)