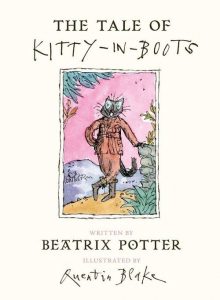 The manuscript by Beatrix Potter was rediscovered two years ago when Jo Hanks, publisher at Penguin Random House Children’s UK, stumbled across an out-of-print literary history about Beatrix Potter from the early 1970s. Hanks found in the book both a reference to a letter that Potter had sent her publisher in 1914, which referred to a story about “a well-behaved prime black Kitty cat, who leads rather a double life,” and an unedited manuscript of the tale. The publication was announced in January, with Quentin Blake as the illustrator, to great fanfare; 2016 also celebrates what would have been Potter’s 150th birthday.

Mirren, a Royal Shakespeare Company veteran, has earned scores of awards, including an Oscar, Tony, and four Emmys, playing characters as diverse as Elizabeth II (The Queen) and detective Jane Tennison (Prime Suspect).

In the U.S., THE TALE OF KITTY-IN-BOOTS will be released as a hardcover book-and-CD by Frederick Warne & Co., Beatrix Potter’s original publisher, and as a standalone digital audiobook by Listening Library, both imprints of Penguin Random House.