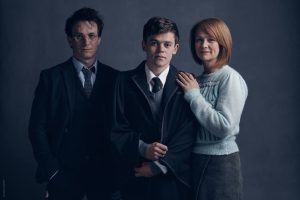 The first photos of Harry, Ginny and Albus Potter as they will appear in the London stage production of Harry Potter and the Cursed Child Parts One and Two were released to press today and on the production’s website and Pottermore. The four portraits, showing actors Jamie Parker as Harry Potter, Poppy Miller as his wife Ginny, and Sam Clemmett as their son Albus Severus, can be viewed at www.harrypottertheplay.com and Pottermore.com.

The first seven Harry Potter stories, published by Scholastic in the U.S. between 1998 and 2007 have sold more than 160 million copies in the U.S., over 450 million copies worldwide, and are distributed in more than 200 territories, translated into 79 languages, and have been turned into eight blockbuster films.

To learn more about the Harry Potter books, visithttp://mediaroom.scholastic.com/harrypotter.