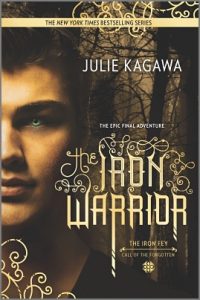 The internationally bestselling The Iron Fey series consists of seven books (The Iron King, The Iron Daughter, The Iron Queen, The Iron Knight, The Lost Prince, The Iron Traitor and the newly released The Iron Warrior) and three novellas (“Winter’s Passage,” “Summer’s Crossing” and “Iron’s Prophecy,” collected inThe Iron Legends anthology). The Iron Fey series has been published in more than 20 countries, including the United Kingdom, Australia, France and Germany.

“The first sentence on the first page of The Iron Kingcaptured my imagination and drew me into a world where faeries were real and anything could happen,” said Natashya Wilson, Executive Editor of Harlequin TEEN. “As I read that original manuscript, my hands were shaking and I knew, I just knew, I had received something incredibly special. Watching The Iron Fey come to life and grow has been one of the most rewarding experiences of my career, and I have been honored and privileged to work with Julie on this unforgettable series.”

The Iron Fey series follows Meghan Chase, a young half-human, half-faery girl as she fights to claim her magical birthright after her half-brother, Ethan, is abducted. Rescuing Ethan draws her into the Nevernever—the magical world—where the never-before-seen Iron fey are raining destruction upon traditional faeries. As their adventures unfold, Meghan’s quest and Ethan’s survival are fraught with unimagined dangers, unpredictable powers and undreamed-of consequences.

In The Iron Warrior, the unforgettable and epic conclusion to the beloved series, the Veil separating the world of Faery and the human world is torn away and the belief and glamour it produces flows into the forgotten faery queen, who has grown strong once more. Now she and her followers threaten the courts and all of Faery—and the Summer and Winter courts prepare for a war that will divide family and unite old friends once more. For more about The Iron Fey series, visit juliekagawa.com/iron-fey.

“It’s incredibly exciting,” said Kagawa. “Back when I first started The Iron King, I was just an unknown writer who wanted to be published. I had no idea what would happen, how the series would unfold and evolve into this massive thing with its own history, characters, and backstory. And here we are, one million books later, and the world of the Iron Fey has grown beyond all my expectations.”

About Harlequin TEEN
Harlequin TEEN™ is the home of critically acclaimed, award-winning, commercial young-adult fiction from bestselling established authors and fresh new voices. The program publishes a variety of genres, including contemporary, fantasy, dystopian, paranormal, historical, romance and horror, and it releases one to three original novels each month. Launched in 2009, Harlequin TEEN is dedicated to publishing authentic, compelling fiction that will resonate with readers and be remembered long after the covers are closed. Harlequin TEEN is an imprint of Harlequin—a division of HarperCollins Publishers—which has offices in 14 countries and publishes in as many as 34 languages and 102 international markets.

About Julie Kagawa
Julie Kagawa is the New York Times and USA TODAY bestselling author of the award-winning The Iron Fey series, the Blood of Eden trilogy and the Talon saga. Born in Sacramento, California, she moved to Hawaii at the age of nine. Julie now lives near Louisville, Kentucky, with her husband and a plethora of pets. For more information on Julie visit juliekagawa.com.

About Harlequin
Harlequin (www.Harlequin.com) is one of the world’s leading publishers of books for women, with titles issued worldwide in 34 languages and sold in 102 international markets. The company publishes more than 110 titles monthly and more than 1,300 authors from around the world. Harlequin is a division of HarperCollins Publishers, itself a subsidiary of News Corp and one of the largest English-language publishers in the world. Harlequin has offices in 15 countries, including offices in Toronto, New York and London. For more information, please visit Harlequin.com and Facebook.com/HarlequinBooks. Follow Harlequin on Twitter: @HarlequinBooks.