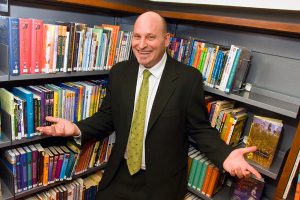 “I laughed out loud so many times reading this witty, inventive text,” said Bicknell. “Jon Scieszka epitomizes what Iona Opie deemed a necessary ‘nursery rhymesical attitude toward life,’ and when there is so much fun and possibly even mischief to be had making a book, I want to be in the middle of it.”

Scieszka said that the book was inspired by the timeless rhymes of Mother Goose, along with other works of collage and postmodernism dear to his heart. “The idea for this book came out of playing around. Surrounding myself with the books and art and music I love most, from Borges and Barth to Duchamp, Calvino, Man Ray, and Banksy, I found my pile of myths, fairy tales, and nursery rhymes sandwiched between Raymond Queneau’s Exercises in Style and my collections of Zen koans. And realized: I Love Nonsense. Deeply connected literate historical nonsense.”

Growing out of this love, DaDa Goose will be a collection of uncollectables: classic nursery rhymes spun on their heads, reconstructed, and lost in translation.

Bicknell said that Scieszka’s deep knowledge of and affection for the works he reconfigures will captivate young readers, who will love recognizing familiar rhymes and seeing them manipulated by a master craftsman.

“Jon really had me at his FBI-style redacted Humpty Dumpty,” Bicknell said.

Born in Flint, Michigan, Jon Scieszka taught at the Day School in New York City before publishing The True Story of the 3 Little Pigs! in 1989; that book has now sold over 3 million copies and has been translated into fourteen languages. His other books include the Caldecott Honor Book The Stinky Cheese Man and Other Fairly Stupid Tales, illustrated by Lane Smith, andBattle Bunny, written with Mac Barnett and illustrated by Matt Myers. The 2008–2009 National Ambassador for Young People’s Literature, Scieszka is also the founder of Guys Read, a web-based literacy program intended to help boys become self-motivated, lifelong readers.

Candlewick Press is an independent publisher based in Somerville, Massachusetts. For over twenty years, Candlewick has published outstanding children’s books for readers of all ages, including books by award-winning authors and illustrators such as National Ambassador for Young People’s Literature emeritus Kate DiCamillo, M. T. Anderson, Jon Klassen, and Laura Amy Schlitz; the widely acclaimed Judy Moody, Mercy Watson, and ’Ology series; and favorites such as Guess How Much I Love You,  Where’s Waldo?, and Maisy. Candlewick is part of the Walker Books Group, together with Walker Books UK in London and Walker Books Australia. The Walker Books Group has a unique ownership structure that includes all of its employees worldwide. Visit Candlewick online at  www.candlewick.com.