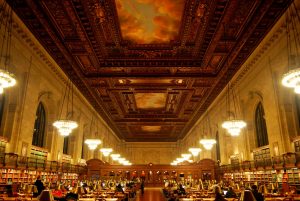 The rooms – located on the third floor of the Library’s iconic Stephen A. Schwarzman Building on Fifth Avenue and 42nd Street – were temporarily closed in May 2014 after a large rosette fell from the Reading Room ceiling overnight while the building was closed.

The Library conducted a full-scale inspection of the ceiling, which required the construction of special scaffolding because of its 52-foot height. WJE Engineers & Architects, P.C. determined that the ceiling – opened in 1911 with the rest of the building – is strong and in very good condition.

“We discovered in the course of our inspection that the ceiling is really in excellent shape, especially considering its age,” said Eric Hammarberg, associate principal at the firm. “It was truly robustly constructed, and it is a pleasure to work with it up close.”

Still, out of an abundance of caution, the Library decided to reinforce all 180 large and medium rosettes with steel cables. It will also restore the mural in the Bill Blass Catalog Room, which was not part of a restoration of the Reading Room completed in 1998.

The work was previously expected to be completed in early 2017. While the historic room is closed, all General Research Division services are available on the Schwarzman Building’s second floor corridor, where, to accommodate researchers, the Library opened several rooms that had previously been closed to the public.