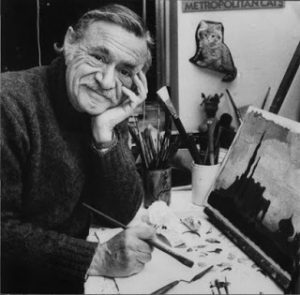 The Great Depression prevented Keats from attending art school. Instead, he worked several jobs, one of which was illustrating for comic strips. When World War II broke out he joined the army, designing camouflage patterns. Keats eventually changed his name in reaction to the anti-Semitism of the era.

After working as a commercial illustrator, Keats began illustrating children’s books. From the start, Keats’ work featured diverse characters. His first solo picture book, The Snowy Day, won the Caldecott Medal in 1963 and remains a classic. His career continued to flourish, and in 1965 he designed the official Children’s Book Week poster. Though Keats passed away in 1983, he continues to inspire storytellers, artists, and readers.


Bring home your own copy of Keats’ Book Week poster at the Children’s Book Week store!

Learn more about Keats’ life and legacy at ezra-jack-keats.org.