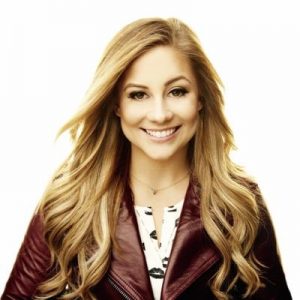 Inspired by her own experiences as a fifteen-year-old Olympic gymnast, The Flip Side features high school sophomore Charlie Ryland and her secret quest to become one of the best gymnasts on the planet. Charlie may seem like your average high school teen—but she’s just really good at pretending. Outside of school, Charlie spends all her waking hours training and is determined to keep her double life under wraps.

“I am beyond excited to share The Flip Side with teen readers! Working with Simon & Schuster on this story brought back so many amazing memories of my teenage years, training for the Olympics, and everything it entails,” said Shawn Johnson.

Shawn Johnson has accomplished a lifetime of achievements that include winning two Olympic medals, writing a New York Times bestselling memoir, starting her own business, and establishing a career in broadcasting. Johnson is a 2007 World Champion gymnast, a 2008 Olympic women’s gymnastics gold and silver medalist, and a 2006, 2007, and 2008 gymnastics National Champion—all titles she attained by the time she turned sixteen. At the age of seventeen, she became the youngest-ever contestant on ABC’s eighth season of Dancing with the Stars, and in May 2009 she was crowned champion.

“Shawn Johnson is an incredibly accomplished young woman who has proven her poise and dedication both on the balance beam and off. Whether she’s winning gold medals or writing her debut young adult novel, she doesn’t do anything partway, and she always manages to have fun while she’s at it,” said Kristin Ostby, Senior Editor of Simon & Schuster Books for Young Readers, who acquired the novel.