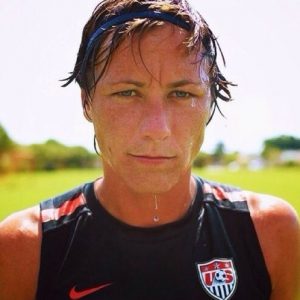 Both books, entitled FORWARD, are scheduled for a fall 2016 release. The deal was negotiated by Julia Cheiffetz, Executive Editor at Dey Street, and Alyson Day, Senior Editor at HarperCollins Children’s Books, with Dan Levy at Wasserman Media Group.

After a decades-long soccer career culminating in leading the US Women’s National Team to World Cup victory, Wambach announced her retirement on the heels of a White House ceremony honoring the World Cup champions. Wambach is the highest scoring soccer player of all time- male or female- and has been called “the soul of the United States team” by the New York Times. She has also been a vocal advocate for women’s rights, equal pay and equal opportunity, pushing to translate the success of the her team’s win to the wider world.

Cheiffetz says, “Abby is a boundary-pusher by nature. She is one of the greatest athletes in sports history, and she carries that strength and wisdom with her off the field. I am confident she’s someone we’ll be hearing a lot more from in the future.”

Wambach says, “I’m not writing a book to say “Look at me!” I want to share my story, my struggles, and my worldview with the hope that it may inspire others to dream big, and fight for a better world.”

ABBY WAMBACH is an American soccer player, coach, double Olympic gold medalist, FIFA Women’s World Cup Champion, and the 2012 FIFA World Player of the Year. A six-time winner of the U.S. Soccer Athlete of the Year award, Wambach has been a regular on the U.S. women’s national soccer team since 2003 earning her first cap in 2001. As a forward, she currently stands as the highest all-time goal scorer for the national team and holds the world record for international goals for both female and male soccer players with 184 goals. In May 2015, Time magazine included her in its list of the 100 most influential people in the world.

HarperCollins Publishers is the second largest consumer book publisher in the world, with operations in 18 countries. With nearly two hundred years of history and more than 120 branded imprints around the world, HarperCollins publishes approximately 10,000 new books every year in 17 languages, and has a print and digital catalog of more than 200,000 titles. Writing across dozens of genres, HarperCollins authors include winners of the Nobel Prize, the Pulitzer Prize, the National Book Award, the Newbery and Caldecott Medals and the Man Booker Prize. HarperCollins, headquartered in New York, is a subsidiary of News Corp (NASDAQ: NWS, NWSA; ASX: NWS, NWSLV) and can be visited online at corporate.HC.com.