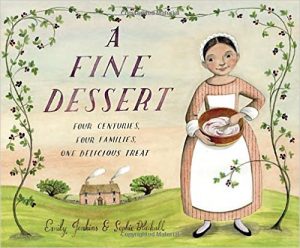 I’ve been following the controversy surrounding the text and illustrations of the picture book A Fine Dessert (NPR story here and NYT article here), and I want to comment from my perspective as an editor. I wasn’t the editor of A Fine Dessert, but I could have been. Well, not literally, as the manuscript wasn’t submitted to me, but I mean that I easily could have been the editor of a book that despite my best intentions was accused of propagating stereotypes about slavery. It could have happened because I’m white: the product of a white-dominant society and a white-dominant industry that influence me in ways that I am sometimes blind to.

When I first read A Fine Dessert, I didn’t stop for a second to think that there might be anything offensive in either the text or illustrations. I was a bit lukewarm on the book, as memory serves, but only due to a concern about the story arc. Mostly, I was intrigued by the recipe for blackberry fool, which I photocopied and brought home to try with my daughter.

So when the blogs and Twitter started exploding with anger and indignation, I was surprised. And I thought, Thank goodness that wasn’t my book. But I knew in my heart it could have been. My efforts to police my books aren’t enough. I like to think I have been useful in some ways: removing a picture of a raccoon from the clothing of a black baby, changing the name of a scary bull in a picture book from “black bull” to “big bull” (as well as changing its color), and getting rid of the watermelons in a plantation scene. I noticed these problems and changed them, but given the egregious nature of all three, I’m not sitting here patting myself on the back. Instead, I’m scared about what I’m not noticing.

My knee-jerk reaction to controversies like those surrounding A Fine Dessert is to want to retreat and stop publishing anything that could be considered controversial, or anything that might show my ignorance. And there are some people, understandably so, who would say that it is better for a book not to be published than to be published if it’s flawed. I get that, I really do, but I’m not sure it’s the answer.

The answer, I think, includes hiring more people of color in publishing, more actively seeking out works by people of color, and finding ways to publish those works with sensitivity. Publishers should also commit to finding appropriate expert readers for works in progress. And we all need to listen better and learn from one another—especially when mistakes come to light. These are not new ideas, but they are important ones that bear repeating.

There is much work to be done.

Yolanda Scott is editorial director at Charlesbridge, where she has edited nearly 200 books since beginning her career in 1995. She is a co-founder of Children’s Books Boston, sits on the board of directors of the Children’s Book Council, and is a member of the CBC Diversity Committee. She lives near Boston.