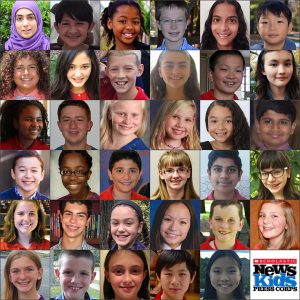 New York, NY – The award-winning Scholastic News Kids Press Corps™ today welcomed 27 new Kid Reporters, ages 10 to 14, to the country’s oldest and largest student reporting program. The newly-appointed reporters will join eight returning young journalists to report “news for kids, by kids” with coverage of current events, breaking news, entertainment stories, and sports events from their hometowns and on the national stage. The new team of 35 Kid Reporters from 22 states and the District of Columbia will carry out a long-standing tradition of covering the presidential election, reporting on stories from the campaign trail to Election Day, and the inauguration of the next U.S. president.

The full list of Kid Reporters, along with their bios, can be viewed here:http://www.scholastic.com/reportersnotebook.

“Through the stories on our blog, and the reporting in Scholastic News magazine and on Scholastic News Online, Kid Reporters provide a relevant and age-appropriate look at contemporary news for readers just like them,” said Suzanne McCabe, Editor of the Scholastic News Kids Press Corps. “We’re gearing up for an exciting year of news coverage that will offer these young reporters tremendous opportunities to grow as journalists and writers.”

Scholastic News Kids Press Corps editors chose the reporters from more than 200 applications, which required students to submit a news report about their local community, ideas for future stories, and a personal essay explaining why they would like to be a Kid Reporter. In the 2014–15 program year, Kid Reporters interviewed Republican presidential candidates, Carly Fiorina and Jeb Bush, as well as authors, entertainers, and newsmakers including Dav Pilkey, creator of Captain Underpants; Jack Black, actor and star ofGoosebumps; and Buzz Aldrin, former Apollo astronaut.

For more than 15 years, the Scholastic News Kids Press Corps has delivered news to classrooms nationwide. Stories by the Kid Reporters appear in select issues of Scholastic classroom magazines, which are read by more than 25 million students nationwide, and are available online at: www.scholastic.com/news.

The 2015–2016 members of the Scholastic News Kids Press Corps are:
*indicates new reporter