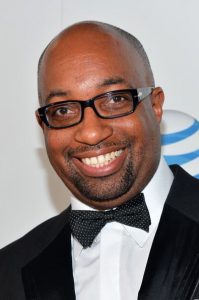 BOSTON, MA — Houghton Mifflin Harcourt Books for Young Readers today announced a major four book deal with author and poet Kwame Alexander, who received the 2015 Newbery Medal for his novel-in-verse, The Crossover. The deal includes Rebound, a prequel to The Crossover, as well as an untitled trilogy. The trilogy will chronicle one young boy’s epic quest for freedom after being taken from his home in Ghana, and will cover the Middle Passage, the Underground Railroad, the Civil War, and beyond.

“Kwame Alexander is a singular force of nature. An inspiring and influential speaker and a dynamic writer and poet, Kwame has turned countless kids onto reading and poetry,” commented Margaret Raymo, Senior Executive Editor at HMH. “I am thrilled to be able to continue to work with him on his future books: Rebound which will continue the magic created by The Crossover, and the trilogy, which will be unlike any project ever published, a sweeping, literary tour de force that children will read for years to come.”

“I’m beyond excited to continue working with HMH. They shared my vision with The Crossover and together we’re reaching and inspiring hundreds of thousands of young readers through poetry,” added Alexander. “With Rebound I get to write more about one of my favorite characters, the father in The Crossover. In the trilogy I hope to show that the people we call ‘slaves’ had lives long before they were brought here. Knowing that makes us all better. This new partnership ensures we’ll continue this inspired effort.”

Alexander is the founder of two literacy organizations, Book-in-a-Day and LEAP for Ghana, and he regularly travels the world as a literacy advocate and expert. He has owned several publishing companies, written for stage and television, produced jazz and book festivals, and taught high school English. In 2015, Alexander served as the inaugural Bank Street College of Education’s writer-in-residence.

The deal was done with Arielle Eckstut, of Levine, Greenberg, Rostan Literary Agency. Rebound will be published Spring 2018.

ABOUT HOUGHTON MIFFLIN HARCOURT TRADE PUBLISHING
For nearly two centuries, Houghton Mifflin Harcourt Trade Publishing has published some of the world’s most renowned novels, nonfiction, children’s books, and reference works. As part of a leading global learning company, it is uniquely positioned to create educational and entertaining content for multiple channels and in various formats, from hardcovers and paperbacks to e-books and mobile apps. Its distinguished author list includes ten Nobel Prize winners, forty-eight Pulitzer Prize winners, fifteen National Book Award winners, and more than one hundred Caldecott, Newbery, Printz, and Sibert Medal and Honor recipients. HMH publishes such distinguished authors as Philip Roth, Temple Grandin, Tim O’Brien, and Umberto Eco, and a celebrated roster of children’s authors and illustrators including Lois Lowry, Chris Van Allsburg, and David Wiesner. HMH is also home to The Best American series®; The American Heritage® and Webster’s New World® dictionaries; Betty Crocker®, Better Homes and Gardens®, How to Cook Everything®, The Gourmet Cookbook, and other leading culinary properties; the Peterson Field Guides®; CliffsNotes™; books by J.R.R. Tolkien; and many iconic children’s books and characters, including Curious George®, The Little Prince, and The Polar Express.