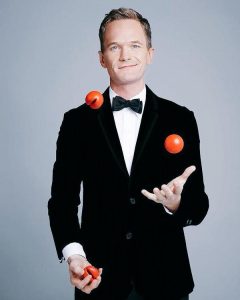 Scheduled to launch in Spring 2017 as an illustrated hardcover and ebook, and also in audio (which Harris will narrate), The Magic Misfits is Harris’s first foray into writing for young readers and follows the enormous success of his bestselling adult memoir Neil Patrick Harris: Choose Your Own Autobiography. Well known for his creative genius on the screen, stage, and page, Harris, with this latest endeavor, combines his passion as a magic enthusiast with his more recent experiences as a parent to craft a series that will inspire and entertain kids.

“Books are awesome. Reading and books have become a mainstay in my family, and they have gotten me thinking in a new way about the power of storytelling,” commented Harris. “Playing with elements of magic, adventure, and friendship, The Magic Misfits is the kind of series that would have thrilled me as a kid, and I hope it does just that for today’s young readers.”

“We are thrilled that Neil Patrick Harris has decided to turn his spectacular talents to writing for young readers,” said Tingley. “Neil has proven time and time again that he knows how to deliver powerful entertainment experiences in a variety of forms to a wide range of audiences. We have no doubt he will take the children’s book world by storm!”

Neil Patrick Harris is an accomplished actor, producer, director, host, author, and magician. In addition to his numerous acting credits, Harris also served as director on several projects on screen and on stage. Harris directed the highly acclaimed intimate illusion show Nothing to Hide, featuring two award-winning magicians, in both Los Angeles and New York. A five-time Emmy Award winner and winner of the 2014 Tony Award for Best Actor in a Musical for his performance in Hedwig and the Angry Inch, Harris also notably served as President of the Academy of Magical Arts from 2011–2014. Harris currently serves as host and Executive Producer of NBC’s new live variety series Best Time Ever with Neil Patrick Harris. In October of 2014, Neil’s structurally innovative memoir, Neil Patrick Harris: Choose Your Own Autobiography, was released with great success. The Magic Misfits is his middle-grade debut.