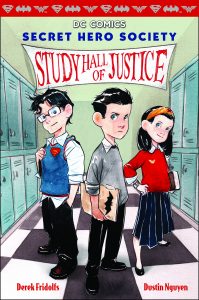 New York, NY — Scholastic (NASDAQ: SCHL), the global children’s publishing, education and media company, has acquired rights to three ‘DC Comics: Secret Hero Society’ illustrated novels, based on beloved DC Comics Super Hero characters, to be written and illustrated by Eisner Award-nominees Dustin Nguyen and Derek Fridolfs. The first book in the series, Study Hall of Justice, will be published in February 2016 and presents a twist on the idea of junior sleuths, using comics, journal entries, newspaper articles, and doodles to reimagine Batman, Superman, and Wonder Woman as middle-grade students in a mysterious school. Study Hall of Justice will be published in hardcover simultaneously in the United States, United Kingdom, Canada, Australia, and New Zealand.

In Study Hall of Justice, young Bruce Wayne is the new kid at Ducard Academy, a prep school for gifted middle school students. Bruce finds out pretty quickly that he doesn’t fit in: the faculty seems to not just encourage villainous behavior from its students, but reward it. Bruce makes friends with two other outsiders, farm boy Clark Kent and the regal Diana Prince. They soon discover that not only are the kids here special, they all seem super. The three band together to form a detective squad to find out why all of these extraordinary kids have been brought together at Ducard Academy, and to see just what the faculty is plotting. They’ll try their best to solve the case, but just because you’re heroic, it doesn’t mean you get to stay up past eleven.

“Scholastic and Warner Bros. Consumer Products have been publishing collaborators for more than twenty years and we couldn’t be more excited that they’ve entrusted us to take some of their most iconic DC Comics characters on an adventure to a place that still strikes fear in the hearts of adults . . . middle school,” said Samantha Schutz, Associate Publisher, Licensing and Nonfiction, Scholastic. “To bring this action-packed and comedic series to life, we’ve enlisted the Eisner nominated team behind Batman Lil’ Gotham, Dustin Nguyen and Derek Fridolfs. What makes this series especially appealing is that it’s perfect for new fans to the franchise, but will still delight veterans who will pick up on subtle references and ‘easter eggs’ throughout the books.”

“Scholastic has been a long-standing partner and we’re excited to expand our collaboration to bring the DC Comics Super Heroes to young fans in this new book series set in middle school,” said Karen McTier, Executive Vice President, Warner Bros. Consumer Products. “This charming, visually driven, comedic series will allow the readers to explore and experience the mysteries, adventures and mishaps of middle school alongside their favorite DC Comics characters.”

“I don’t know what it’s like to shoot lasers from my eyes, fly an Invisible Jet, or dress like a bat. But I remember my years in school fondly and tried to tap into that,” said Derek Fridolfs. “And when in doubt, it doesn’t hurt to write in ninjas or have class clowns throwing pies.”

“Creating stories for children has always been what I love to do,” said Dustin Nguyen, “And to be able to do so with iconic characters I myself grew up with, it’s as exciting as being in the books myself!”

About Derek Fridolfs
Derek Fridolfs works in the comic industry as a writer, inker, and artist, on many beloved properties. With Dustin Nguyen, he co-wrote Batman: Li’l Gotham and Justice League Beyond. He’s also written for such titles as Batman: Arkham City Endgame, Arkham Unhinged, Detective Comics, Legends of the Dark Knight, Adventures of Superman, Sensation Comics Featuring Wonder Woman, Catwoman, Zatanna, JLA, and comics based on the cartoons forAdventure Time, Regular Show, Dexter’s Laboratory, Looney Tunes, and more. Derek enjoys traveling, late-night movie watching, book shopping, and just about all pizza. Derek lives in Fresno, California, and you can find more information about him athttp://dfridolfs.blogspot.com/

About Dustin Nguyen
Dustin Nguyen is best known for his many interpretations of Batman for DC Comics, including the co-creation of DC’s all-ages series Batman: Li’l Gotham, written by himself and Derek Fridolfs. Currently, he illustrates lots and lots of robots and aliens on Descender, a monthly comic published through Image Comics, of which he is also co-creator, alongside artist/writer Jeff Lemire. Outside of comics, Dustin also moonlights as a conceptual artist for toys and consumer products, games, and animation. He enjoys sleeping, driving, and sketching things he cares about. Dustin lives in Orange County, California and you can find more information about him at http://duss005.com/.

About DC Entertainment
DC Entertainment, home to iconic brands DC Comics (Superman, Batman, Green Lantern, Wonder Woman, The Flash), Vertigo (Sandman, Fables) and MAD, is the creative division charged with strategically integrating its content across Warner Bros. Entertainment and Time Warner. DC Entertainment works in concert with many key Warner Bros. divisions to unleash its stories and characters across all media, including but not limited to film, television, consumer products, home entertainment and interactive games. Publishing thousands of comic books, graphic novels and magazines each year, DC Entertainment is one of the largest English-language publishers of comics in the world.