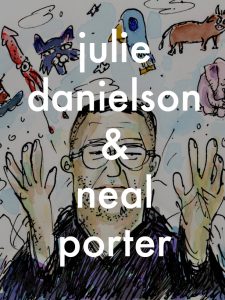 Porter originally aspired to be a theater critic. Though he’s gone on to work in a different medium, he thinks of the picture book “as a proscenium stage, with the action not only unfolding across the stage but also propelled by page turns.”

My job is to figure out what’s needed in order to produce the best possible book—and then to figure out how to supply it. There’s often a bit of role playing involved. I’ve been a coach, a father, a teacher, a disciplinarian, and more often than I’d like to admit, a therapist, but the role I’m most comfortable playing is sounding board. (Number Five Bus)