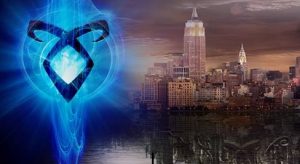 Los Angeles, CA – Constantin Film will make its debut as an exhibitor at MIPCOM (October 5-8, in Cannes) to showcase its new drama series, SHADOWHUNTERS, with buyers invited to attend a special premiere screening on Tuesday, October 6.

Long one of Europe’s most prolific feature film and television production companies, Constantin is branching out into US drama , with LA-based senior advisor Gary Marenzi handling international distribution duties.

From Executive Producers McG, Ed Decter and Robert Kulzer, SHADOWHUNTERS is based on Cassandra Clare’s best selling literary franchise, THE MORTAL INSTRUMENTS, which has sold over 40 million books worldwide. SHADOWHUNTERS will premiere in the US on ABC Family in early 2016, with an initial 13-episode order.

SHADOWHUNTERS follows Clary Fray, who discovers on her 18th birthday that she comes from a long line of Shadowhunters – humans born with angelic blood who protect humanity from demons. When her mother Jocelyn is kidnapped by a powerful foe from her past, Clary is thrown into a new life of demon hunting under the guidance of charming and headstrong Shadowhunter Jace Wayland. Now living in the Shadow World among warlocks, vampires, werewolves and faeries, Clary begins a journey of self-discovery as she learns more about her past and what her future may hold.

“We have nurtured the development of SHADOWHUNTERS for premium broadcasters all over the world, and we are pleased to bring this exciting fantasy saga to the international marketplace,” stated Constantin CEO, Martin Moszkowicz.

Constantin Film has been synonymous with quality and success for over 30 years. It has played a crucial role in establishing German cinema both nationally and internationally. Between 1977, when Bernd Eichinger established the company, and 2009, when it was integrated into media conglomerate Constantin Medien AG, Constantin Film has emerged as the most successful independent production and distribution company in the German media industry. Constantin Film’s operations include German and English language motion picture theatrical production, theatrical distribution, home entertainment distribution, licensing and television production.

Constantin Film’s diverse slate includes box office hits and award-winning films alike, ranging from comic book to literary adaptations, historical dramas, action and genre, among them THE NEVERENDING STORY, THE FANTASTIC FOUR film franchise, THE NAME OF THE ROSE, NOWHERE IN AFRICA, DOWNFALL, THE BAADER MEINHOF COMPLEX, POPE JOAN, THE HOUSE OF SPIRITS, the RESIDENT EVIL film franchise, THE MORTAL INSTRUMENTS: CITY OF BONES, TARZAN®, POMPEII, FACK JU GOEHTE, one of the biggest ever German box office hits, LOVE, ROSIE adapted from the bestselling Cecelia Ahern novel “Where Rainbows End”, and the upcoming television series SHADOWHUNTERS, which will air on ABC Family in 2016.