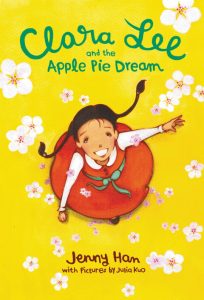 I often have iterations of this conversation with my publishing colleagues, especially now that diverse books are becoming more visible (and hopefully will continue to be so). Reflections of my Asian-American experience were not common in the 90s and early 00’s when I was still in school; when I come across stories now, I think wistfully, “I wish I read this back when I was a kid!”

So I present you a completely personal, completely not comprehensive list of 7 middle grade and young adult books featuring contemporary Asian-American characters. While my heritage is Chinese, the characters here include Taiwanese-American, Korean-American, Indian-American and more—and I found plenty to identify with. The only other thing they have in common is the fact that even if they were published when I was the “right age,” I came to all of these as an adult.

It’s hard to compile a list like this without mentioning Lisa Yee. Witty, sarcastic 11-year-old Millicent Min has her identity all wrapped in intelligence, awards and academic success. She has few friends, as her peers resent her for being a high school junior. While many academically-driven Asian-Americans can identify with Millicent, even more will share her struggles to embrace her uniqueness, make friends and connect with others.

A very kid-friendly middle grade book that explores Chinese-American identity through the eyes of sixth-grader Lucy. Lucy’s sister Regina is the perfect ‘culturally aware’ Chinese-American, but Shang enjoys subverting stereotypes with Lucy, who prefers to play basketball instead of going to Chinese school. Also, a wonderful exploration of intergenerational dynamics when Lucy ends up sharing a room with her great-aunt from China.

The Year of the Dog by Grace Lin (2007, Little, Brown Books for Young Readers)

A semi-autobiographical middle grade novel by Grace Lin detailing the life of her younger self, Pacy. Her observations range from there not being any Chinese munchkins in the Wizard of Oz to her parents’ inability to put up Christmas decorations, but also just every day <i>stuff</i>–friends, school, drawing, Halloween. Lin has written two more Pacy books, The Year of the Rat and Dumpling Days.

A thoughtful YA novel about a teenage Sam struggling with her Sikh identity in post-9/11 New Jersey. Sam’s mother rejected her Sikh culture, and as a result, Sam grew up a “coconut"—brown on the outside, white on the inside. Meminger really explores the difficulties of navigating native and acquired cultures, both internally with Sam and externally when her Sikh uncle Sandeep shows up on her family’s doorstep.

There aren’t enough superlatives to describe this Printz-winning YA graphic novel/memoir by Gene Luen Yang, who seamlessly weaves three seemingly unrelated storylines (an American-born Chinese boy who is the only Asian in his new school, the myth of "The Monkey King”, and the story of Chin-Kee, the Chinese stereotype who makes his white cousin’s life a living hell) in this tale of identity, friendship and coming-of-age.

It’s impossible for me to judge this book objectively, because I basically lived it. Patti is a first-generation Korean-American, and her only motivation for getting through high school is that she will one day graduate from a prestigious university and become a doctor or lawyer. Chronicling her senior year and sprinkled with witty SAT tips, Korean spam/kimchi recipes and college application quesitons, Good Enough’s best moments are Patti’s interactions with her parents.

I know there are other books that I’ve inevitably left off this short, limited list. Please share your favorites!