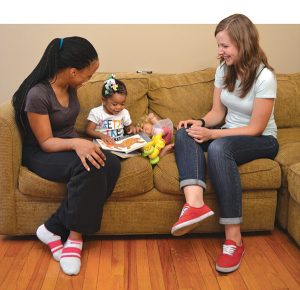 Suskind first became aware of the obstacles to language development after performing surgery to restore hearing in deaf children. Children from low-income families spoke significantly less than those of wealthier families, signaling a much wider problem. Her Thirty Million Words Initiative strives to close this achievement gap.

Suskind maintains that children are not born smart, but parents help make them so through verbal interaction. She boils down the TMW directive to what she calls the “Three Ts”: Tune In, Talk More, and Take Turns. Another TMW mantra for parents: Don’t just do it, talk them through it. In other words, the quality of interaction between adults and children matters. (School Library Journal)