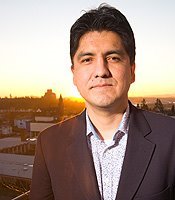 New York, NY — Megan Tingley, Executive Vice President and Publisher of Little, Brown Books for Young Readers, announced today the upcoming publication of Thunder Boy Jr., the debut picture book by National Book Award–winning and bestselling author Sherman Alexie with illustrations by critically acclaimed picture book artist Yuyi Morales. Alexie’s Thunder Boy Jr. will release on May 3, 2016, as a jacketed hardcover and was edited by Alvina Ling, Editor in Chief, and Associate Editor, Bethany Strout. The acquisition for world rights was made by Tingley with Nancy Stauffer at Nancy Stauffer Associates for the author and Charlotte Sheedy at Charlotte Sheedy Literary Agency representing the artist. This is Alexie’s first title for young readers since his enormously popular novel The Absolutely True Diary of a Part-Time Indian in 2007, which has sold over 1.5 million copies to date.

Thunder Boy Jr. tells the story of a little boy who is named after his dad. But Thunder Boy Jr. doesn’t want to share a name; he wants a name that is all his own, and he goes through many possibilities—Not Afraid of Ten Thousand Teeth? Touch the Clouds? Old Toys Are Awesome? Just when all hope is lost, his dad helps him find the perfect name, one that celebrates the love between father and son.

“In my family, we give one another Indian names to tease each other, and I was playing with that tradition in this book,” said Alexie. “I love that there will be a picture book with a happy Indian family! Seeing the sketches for the first time of Yuyi’s gorgeous art just made me cry with joy.”

“For years the work of Sherman Alexie has been read, admired, and shared in my family,” commented Morales. “One Christmas, my son gave The Absolutely True Diary of a Part-Time Indian to his grandparents as a gift, wanting them to feel the force of Sherman’s stories. What an honor it is to be part of his thunderous work!”

“Sherman Alexie began his illustrious career as a poet so it is no surprise that his first picture book text is an exquisitely crafted and rousing read-aloud,” remarked Tingley. “Thunder Boy Jr. is a powerful story celebrating diversity and the special relationship between father and son.”