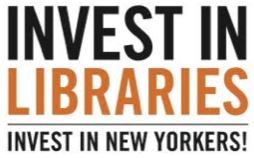 JUNE 26, 2015 — New York City’s public libraries will offer six-day service for the first time in nearly a decade thanks to a $43 million increase in operating funding in the Fiscal Year 2016 budget approved by Mayor de Blasio and the New York City Council.

The additional $43 million in operating funds is the largest ever city funding increase to libraries. It will allow for citywide six-day branch service, as well as an increase in hours and programming seats, more expert library staff, and more.

The budget — adopted today — also includes a capital allocation of at least $300 million to libraries over 10 years, which will go towards improving, renovating, modernizing, and repairing library facilities across the city. This is the first time libraries have received such a large, long-term investment, allowing them to adequately plan for the future.

The City’s three library systems — The Brooklyn Public Library, The New York Public Library, and Queens Library — joined together this year to advocate for increased funding under the Invest in Libraries campaign.

“With the City’s historic investment in libraries, all New Yorkers will be able to access our collections and services at least six days per week. We are very grateful to Mayor de Blasio, Speaker Mark-Viverito, Majority Leader Van Bramer, Finance Committee Chair Ferreras, Libraries Subcommittee Chair Constantinides and the entire New York City Council for their leadership. We also applaud the thousands of patrons and Local 1482 members who encouraged their elected officials to support Brooklyn Public Library. It is a great day for libraries in New York City,” said Linda E. Johnson, President & CEO of Brooklyn Public Library.

“The people of New York City made clear how much they love their libraries and library staff, and the City’s elected leaders in turn provided libraries with their largest ever operating increase and unprecedented capital funding,” said New York Public Library President Tony Marx. “The City’s branches – lifelines for so many – will now be open six-days citywide, offering the public increased access to materials, programs, classes and so much more. Additionally, we can now offer more research library services. We are so grateful to Mayor de Blasio, City Council Speaker Mark-Viverito, Council Finance Chair Ferreras, Majority Leader and Cultural Affairs Chair Van Bramer, Sub-Committee on Libraries Chair Constantinides and all the members of the Council for this increase, which provides great momentum for the future. We also want to thank the over 150,000 New Yorkers who took the time to send letters in support of the libraries that they so rely on — we look forward to providing them even more.”

“Queens Library is so grateful to Mayor Bill de Blasio, Speaker Melissa Mark-Viverito, Finance Chair Julissa Ferreras, Majority Leader Jimmy Van Bramer, Committee Chair Costa Constantinides and the whole City Council for recognizing the value that libraries provide and the potential value that increased funding of $43 million will provide,” said Queens Library Interim President and CEO Bridget Quinn-Carey. “The restored funds will be used to hire the additional staff so we can increase hours of service, provide more programs and purchase more library materials that the people of Queens want and need. We are also grateful to our partners at DC37, Local 1321 and all the members of the community who told their elected officials that libraries are a priority for them.”

Going into this year’s budget season, libraries were still recovering from a steady stream of cuts since Fiscal Year 2008 — Mayor de Blasio and the City Council raised funds for the first time in six years in Fiscal Year 2015, and continued their work with the unprecedented investment in Fiscal Year 2016.

“On behalf of the City’s three library systems, and the millions of New Yorkers who enjoy the 217 branches across the city — thank you for investing in libraries,” said a joint statement from Invest in Libraries. “This investment will benefit New Yorkers both immediately and for years to come.”

About Brooklyn Public Library
Brooklyn Public Library (BPL) is an independent library system for the 2.5 million residents of Brooklyn. It is the fifth largest library system in the United States with 60 neighborhood libraries located throughout the borough. BPL offers free programs and services for all ages and stages of life, including a large selection of books in more than 30 languages, author talks, literacy programs and public computers. BPL’s eResources, such as eBooks and eVideos, catalog information and free homework help, are available to customers of all ages 24 hours a day at our website: www.bklynlibrary.org.

About Queens Library
Queens Library is an independent, not-for-profit corporation and is not affiliated with any other library. Queens Library serves a population of 2.3 million in one of the most ethnically diverse counties in the U.S. and has among the highest circulations of any public library system in the world. For more information about programs, services, locations, events and news, visit the Queens Library website at www.queenslibrary.org or phone 718-990-0700. Queens Library. Enrich your life®