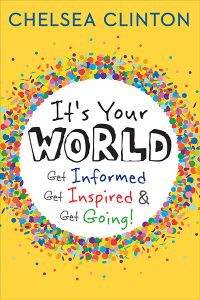 New York, NY — In a new book for young readers ages 10-14 scheduled for publication on September 15, 2015, Chelsea Clinton breaks down some of the world’s biggest challenges and shares inspiring stories of young people who are already making an impact in their own communities and around the globe.

Filled with visuals including charts, graphs and photographs It’s Your World: Get Informed, Get Inspired & Get Going will address some of the world’s most challenging issues including Poverty, Homelessness, Food Insecurity, Access to Education, Gender Equality, Epidemics, Non-Communicable Diseases, Climate Change, and Endangered Species.

“In It’s Your World, I try to explain what I think are some of the biggest challenges facing our world today, particularly for young people,” said Chelsea Clinton. “I also explore some of the solutions to those challenges and share stories of inspiring kids and teenagers doing amazing work to help people and our planet have brighter and healthier futures. My hope is that the book will inspire readers to realize that they can start making a difference now, in their own way, for their family, their community, and our world.”

It’s Your World: Get Informed, Get Inspired & Get Going! will be published in the U.S. by Philomel Books, an imprint of Penguin Young Readers. International editions will be published simultaneously in the U.K., Ireland, Australia, New Zealand and Canada through Penguin Random House, with foreign language editions to follow.

“We hope this book will encourage young people to look at the world around them differently and give them a better understanding of the challenges facing our future,” said Don Weisberg, President, Penguin Young Readers. “We are thrilled to partner with Chelsea Clinton on this important publication.”

Chelsea Clinton has always been interested in making the world a better place. When she was a child in Little Rock, Arkansas, one of her favorite books was 50 Simple Things Kids Can Do to Save the Earth, and as a teenager in Washington, D.C., she led her school’s service club. While at Stanford, Chelsea worked as a reading and writing tutor and volunteered at the Children’s Hospital. Today, she is Vice Chair of the Bill, Hillary and Chelsea Clinton Foundation where she helps lead the work of the Foundation across its various initiatives, with a particular focus on work related to health, women and girls, creating service opportunities, and empowering the next generation of leaders. Chelsea holds a BA from Stanford University, an MPH from Columbia University, and an MPhil and doctorate degree in international relations from Oxford University.

She lives in New York City with her husband Marc, their daughter Charlotte, and their dog Soren.