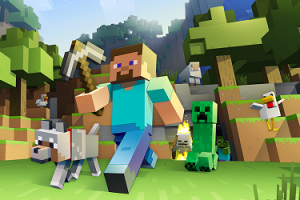 Sean Fay Wolfe was just 16 years old when he wrote, Quest For Justice, the first book of The Elementia Chronicles trilogy, which he originally self-published. Inspired by the best-selling game, this unofficial trilogy brings Minecraft fans and middle grade readers on an action packed adventure. In Quest for Justice, dark forces are at work on the Elementia server, and when new players Stan, Kat and Charlie arrive on the scene, they quickly find themselves in peril. Targeted by more experienced players, the noobs must band together against the king, battle the natural forces of the game, and unravel the mysteries of Elementia in the name of justice.

“Sean is a writer to watch and his talent for storytelling captivated us. We’re thrilled to be partnering with such an exciting young voice on this epic, engaging new series,” says Pamela Bobowicz, Senior Editor, HarperCollins Children’s Books.

In addition to being an unstoppable young storyteller, Fay Wolfe is an avid Minecraft player and loves creating action adventure tales in its endlessly creative virtual world. Sean is an Eagle Scout in the Boy Scouts of America, a four-time all-state musician, a second degree Black Belt in Shidokan karate, and has created many popular online games in the Scratch programming environment. He goes to school in Rhode Island where he is deeply involved with his school’s drama club.