Home > Blog > Getting It Right 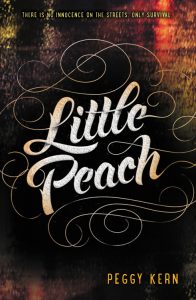 The first time I met Miracle (not her real name), she arrived in a full suit of armor: a thick mask of makeup, black eyeliner pointed like arrows at the edge of her eyes – a warning, perhaps, to not look at her the wrong way – hair slicked back into a severe ponytail, a jean skirt and flat black leather boots suitable for running away, if need be.

My friend, a detective with the NYPD at the time, had arranged the meeting. Miracle was known to police as a reliable source of information about sex traffickers in Brooklyn. She is also a survivor of child prostitution.

When I decided to write Little Peach, I knew I could not attempt the story without speaking directly with victims. I felt I had no right to type a single word on the page without doing so. Little Peach could not be my sheltered imagining of the issue, but an accurate account guided by the victims themselves. My job was to cede my voice, and give rise to theirs.

The first night we met, Miracle and I spoke for three hours.

She told me about the scouts that lie in wait at bus terminals and outside of group homes, looking for runaways and desperate, injured kids. She told me I could go to Port Authority that very night and I would see men wearing red or blue – signifying their particular gang affiliation – hunting for girls.

She showed me the tattoos she was given by her pimp, including a five-point red star placed strategically behind her ear by a sect of the Bloods that deals in trafficking. The placement is intentional: she could easily be identified as their property with the turn of her head.

She explained to me how traffickers use drugs to hook young girls. She herself was hooked on crack-cocaine by the age of twelve. She told me they target black and Latino runaways because, and I quote, “Somebody’s always lookin’ for the white girl, or she’ll want to go home. And that makes her a risk.”

She talked about her mom, who was a prostitute and addict, and the sexual abuses she endured at the hands of mother’s “customers.”

She taught me the difference between the young girls who are sold online and kept out of sight in hotels, and the older ones who are put out to pasture on the “track” – a term for the largely unpatrolled street corners where women are sold.

She told me about the girls she’s loved like sisters through the years. Some of them were murdered. Some were sold to other pimps. Most simply disappeared into the prison system or the streets.

She could not talk about her foster father, who had abused her so badly she still, all these years later, had no words to describe it.

She cried. So did I. And she said, “No one ever asked me these questions before.”

The second time we met, Miracle arrived in a comfy sweat suit. No makeup, hair down. Soft eyes. Sneakers. She continued to talk. And I listened to every word she said.

My time with Miracle, and with another woman named Jen, who I met on the “track” on Flatlands Avenue in Brooklyn and whose story was unbelievably similar to Miracle’s down to a tattoo on her chest, informed  the voices of Michelle, Kat and Baby – not just culturally, racially, and socio-economically – but emotionally. There are moments in the book when Michelle can barely speak to you. Her sentences are broken. She almost loses her ability to communicate because what’s happening is so intolerable. It’s like she’s whispering, or turning her head away. That is the voice of Miracle, in many ways. And of Jen. And of the other girls I watched in the hotels of Brooklyn, but could not get near.

Miracle also taught me the geography of Little Peach. I depicted her world as best I could, and the world shown to me by my friend with the NYPD. Pink Houses, Coney Island  (where Miracle and I would meet), even North Philadelphia, where I spent time working with students years ago – those locations are as real as the girls Peach represents.

Over and over, as I was writing the novel, I would ask myself: Would Miracle agree? Would Jen? If they read this, would they nod their heads and say, Yeah. That’s right, Peg. That’s how it went down.

Research is important, no matter what you’re writing about. But for Little Peach, it meant the difference between my sheltered imagining of what sex trafficking is like – and the actual accounts of victims.

The obvious truth is that no matter how much time I spent in Brooklyn, no matter how many conversations I had with survivors, I will always be a white woman. And I always got to return home to my apartment at the end of the night, where I sleep in safety, where I have food in my refrigerator and where my blond daughter lives in privilege compared to so many other girls in this country.

That I cannot change. And yet, the story matters so much. Peach matters so much. And so, you try. As a writer, as a human, you try – with all your powers and heart and inescapable limitations – to accurately depict the children you are bearing witness to.

You do your best to get it right. And if you missed the mark in moments, you own that, too.

But silence is not an option. Silence – when kids are literally dying – is unacceptable.

Peggy Kern has written two books for the Bluford series. She lives with her daughter in Massachusetts.