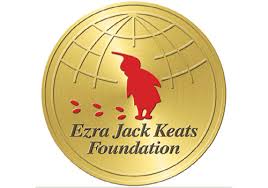 The Ezra Jack Keats Book Award celebrates and inspires exceptional new writers and illustrators, who are seldom recognized in the early stages of their careers. These new artists have created books of beauty in the spirit of Keats that portray the universal qualities of childhood, a strong and supportive family and the multicultural nature of our world.

About the EJK Foundation
Founded by the late Caldecott award-winning children’s book author and illustrator Ezra Jack Keats, the Ezra Jack Keats Foundation fosters children’s love of reading and creative expression by supporting arts and literacy programs in public schools and libraries; cultivating new writers and illustrators of exceptional picture books that reflect the experience of childhood in our diverse culture; and protecting and promoting the work of Keats, whose book The Snowy Day broke the color barrier in mainstream children’s publishing. For more about the Foundation, please visit the www.ezra-jack-keats.org/.