Pam Muñoz Ryan On The Creative Process Behind ‘Echo’ 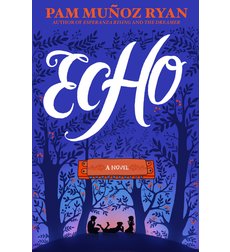 So I had these three main stories, but I didn’t want it to be just episodic – I wanted there to be a richer thread to bring them together. And that’s what led me to this fairy tale that bookends all three of them. Writing fairy tales is almost like a different genre: there’s no backstory, and you do the opposite of what writers normally do in narrative, which is tell instead of show while the reader completely fills in all the blanks. The other thing that was hard was that the sections end on a cliffhanger, so there’s no resolution for each section; I had to leave them dangling. Part of what the fairy tale does is promise that, while it may not be a Disney happily-ever-after, there will be a resolution to tie it all together. (Publishers Weekly)