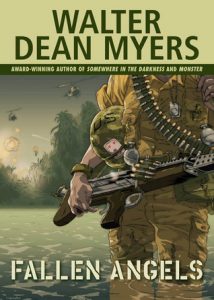 I was a publicity assistant at Scholastic Inc., when I first became aware of Walter Dean Myers’ work. The book: Fallen Angels. My perspective on children’s literature was changed forever after reading the first few pages, and by the end of the book I was in awe of the man.

I met Walter a few years later while working on Brown Angels and the photographic exhibit based on the book, which traveled across the country.  My first encounter with him exemplified our ensuing relationship.

He had refused a car service to Harlem for the opening of the Brown Angels exhibit, and we agreed to take the subway together to the publisher’s dismay. Hey, it was the early ‘90s—NYC subways were not what they are today.

We were looking over the media coverage when a fight broke out among some teens. Walter immediately tried to divert my attention by insisting I read the review in Newsday again. He kept tapping the newspaper and saying, “Read here, read here!”—while looking at the group, not realizing that the paper was upside down. I smiled and said “I’m a Queens girl. I’m not rattled by a little noise. I got your back.” (Amusing visual, since I am 5 feet petite to his over 6 foot frame.) Walter made an indelible impression on me during that campaign. He was steadfast in his conviction that children needed to recognize themselves in books like Brown Angels. They also needed to see themselves as beautiful and valued. I knew the importance of reading, but he helped me realize the power and potential impact of a children’s book on young lives. It was an idea that was expressed consistently through our work together and informed my work as a book publicist.

I was excited when years later his agent, Miriam Altshuler, approached me about working on Walter’s newest book, Shooter. I had left publishing and was (and still am) working at Goodman Media International, the PR firm. I loved working on book projects and was thrilled to be reunited with Walter. The routine went something like this: Miriam would call and say, “Walter has a new book, would you consider working on it?”—as if there was any doubt. After reading the manuscript, I’d call Walter. We would have in-depth conversations about the story, how this latest book fit into his overall repertoire, and how we’d leverage this opportunity, as well as our previous efforts to reach kids who were on the brink of making a choice that would affect them for the rest of their lives. Of course, we also talked about the latest antics and mischief caused by his cat.  But at the end of each call, any call, he would always say: “Ok, love,” and the work would begin.

The campaigns were as varied as the many formats and genres of his books. We went beyond the traditional media relations strategy—everything from pursuing school adoptions for his books, to partnering with organizations on unique-to-his-book initiatives such as “Second Chances,” to appealing to the Supreme Court Justices while they deliberated on whether to ban life sentences in some teen cases. (They did ban them!) Anything and everything to reach, protect and give voice to youth, especially those who needed it most.

Large and small victories had a compounding effect until Walter was named National Ambassador for Young People’s Literature. We knew unequivocally what his platform would be: Reading is not optional. It embodied his journey and was unwavering in its stance—just like Walter Dean Myers.

The last time I saw Walter Dean he was addressing a group of foster parents when a parent asked: “Is a single parent enough to raise a child?” He replied swiftly: “Absolutely, as long as that child is loved.” I struggled to hold back my tears. As a single parent, I took great comfort in his response. Raising sons was also a topic we occasionally discussed on those long calls. I wanted to tell him what that response meant to me and thank him for his answer, but I never got the chance.

Thinking about it now, how do you thank a man whose compassion was boundless; whose tenacity to portray poor inner-city children as human in the eyes of the reader was relentless; who forged new paths with his work and for others just like him, who challenged us and inspired us to be our best selves? I know what I would say.

“Walter, we got your back. We’ll make sure your legacy lives on. Ok, love.”