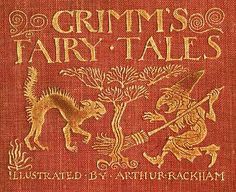 Grimm’s Fairytales has been translated into countless languages and is considered a hallmark of the storytelling tradition. Stories such as ‘Cinderella’ and ‘Hansel and Gretel’ have inspired adaptations across various cultures and artistic mediums.

Neil Gaiman is just one author indebted to the work of Jacob and Wilhelm. He considers himself an “alchemist,” mixing different elements from the Grimm’s text to create something new. He believes there’s nothing like a fairytale to inspire the imagination: