25th Anniversary of ‘Hershel and the Hanukkah Goblins’ 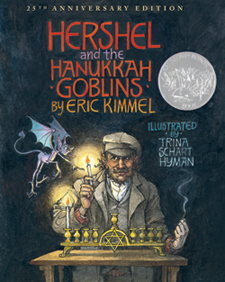 According to Kimmel, many editors “thought it was just too far out and were worried about what the larger Jewish community might think.” He tried another approach, publishing an abbreviated version of the story in Cricket magazine in 1985. The illustrator assigned to the piece, Trina Schart Hyman, was such a fan of Kimmel’s work that she took it upon herself to pursue a publisher for the complete picture book. Holiday House took on the project, ushering in a new classic.

Mary Cash, the current v-p and editor-in-chief at Holiday House speaks to the story’s enduring appeal:

This book has certainly stood the test of time. I have this really thick file of reviews here and Hershel is mentioned again and again, still, after all these years. It’s a story that is satisfying on so many different levels. We wanted to recognize and celebrate that. (PW)