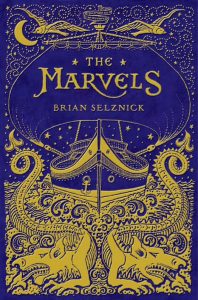 NEW YORK, NY — Scholastic (NASDAQ: SCHL), the global children’s publishing, education, and media company, announced today that it will publish The Marvels, a multi-layered reading experience in words and pictures by pioneering storyteller Brian Selznick, the #1 New York Times bestselling author/illustrator of Wonderstruck and the Caldecott Medal–winning The Invention of Hugo Cabret,which was adapted into Martin Scorsese’s Academy Award–winning movie Hugo. With 440 pages of original drawings and 200 pages of text, The Marvels will be published in hardcover simultaneously in the United States, United Kingdom, Canada, Australia, and New Zealand September 15, 2015. For more on Brian Selznick’s award-winning books, visit: http://mediaroom.scholastic.com/brianselznick.

In The Marvels, Selznick crafts another remarkable artistic and bookmaking achievement that weaves together two seemingly unrelated stories—one in words, the other in pictures—with spellbinding synergy. The illustrated story begins in 1766 with Billy Marvel, the lone survivor of a shipwreck, and charts the adventures of his family of actors over five generations. The prose story opens in 1990 and follows Joseph, who has run away from school to an estranged uncle’s puzzling house in London, where he, along with the reader, must piece together many mysteries. How the picture and word stories intersect will leave readers marveling over Selznick’s storytelling skill. Filled with mystery, vibrant characters, surprise twists, and heartrending beauty, and featuring Selznick’s most arresting art to date, The Marvels is a moving tribute to the power of story.

“A new novel from master storyteller and artist Brian Selznick is a major global publishing moment,” says Ellie Berger, President of Scholastic Trade. “The Marvels is bookmaking at its finest and we look forward to publishing it worldwide.”

“Working with Brian is always an awe-inspiring voyage,” says Tracy Mack, Scholastic Press Executive Editor and Selznick’s longtime editor. “His singular ideas, unique vision, and ability to push himself at every turn to new heights of creativity are quite simply, marvelous.”

“I’m thrilled to finally share The Marvels with readers after three years of intense work on the book, including living briefly in London and spending an entire year drawing the pictures,” says Brian Selznick. “I’ve been a part of the Scholastic family since 1995 and I’m so proud of our latest and most ambitious collaboration.”

Brian Selznick graduated from the Rhode Island School of Art and Design in 1988 and worked for two years after graduation at independent bookstore Eeyore’s Books for Children in New York City. His first book, The Houdini Box, was inspired by a fascination with the famous magician. His illustrations for Barbara Kerley’s The Dinosaurs of Waterhouse Hawkins won a Caldecott Honor award in 2002; and in 2008, his groundbreaking book The Invention of Hugo Cabret was awarded the Caldecott Medal, was nominated for a National Book Award, and was the basis for Martin Scorsese’s Oscar-winning film Hugo. His follow-up illustrated novel, Wonderstruck, debuted at #1 on the New York Times bestseller list. Selznick divides his time between Brooklyn, New York, and San Diego, California, with his husband Dr. David Serlin, a professor at the University of California, San Diego.

Scholastic Corporation (NASDAQ: SCHL) is the world’s largest publisher and distributor of children’s books and a leader in educational technology and related services and children’s media. Scholastic creates quality books and eBooks, print and technology-based learning materials and programs, magazines, multimedia and other products that help children learn both at school and at home. The Company distributes its products and services worldwide through a variety of channels, including school-based book clubs and book fairs, retail stores, schools, libraries, on-air, and online at www.scholastic.com.