Diversity 101: Asians as the Model Minority 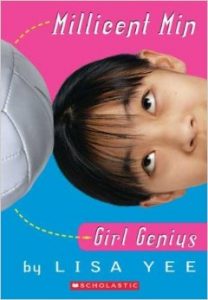 When we look at the spectrum of racial stereotypes, Asians seem to have it good: We’re supposedly smart, hard-working, and obedient. We never complain. Families stick together. We don’t rock the boat (especially the fresher off the boat that we are).

As far as stereotypes go, we’re pretty lucky. Some would say blessed. Who wouldn’t want to be prejudged as all those positive things?

The problem with all stereotypes—racial, cultural, gender, whatever—is that they interfere with your ability to be seen as you. You want to play football, but the Model Minority Stereotype (MMS) says: “Try the marching band.” You want to be a hip-hop star, but the MMS says: “Math and science.” Or maybe you need help, but are unable to reach out. The MMS says: “Asians are quiet. She’s perfectly fine.”

The MMS in Children’s Books Many Asian American children’s books have used the MMS as a familiar point of departure. It’s a clever device that urges readers to look more carefully at Asians they know in real life. We show you what you expect—and then we turn the MMS on its head. Lensey Namioka’s Yang family is full of talented musicians but, in Yang the Youngest and his Terrible Ear, Yingtao is a musical dud who “bow-syncs” his way through a recital. Lenore Look’s Alvin Ho is quiet and timid at school, but he’s loud and rowdy at home. Lisa Yee’s Millicent Min is a Chinese genius, but her equally-Chinese Stanford Wong is an F student. In David Yoo’s The Detention Club, Sunny Lee is a brilliant overachiever “queen bee,” but she hides a terrible, definitely-not-MMS, secret.

The MMS has made appearances in my own work, too. In the chapter book Me and Rolly Maloo, 4th grader Jenna Lee is great at math, socially-isolated, and eager to find a friend. These traits make her an irresistible target for Rolly and Patty, who use her to cheat on a standardized test.

But wait: is Jenna Lee Asian? I never say so in the book. Opting for a post-racial view of things, I chose not to give the characters in Me and Rolly Maloo definitive racial or ethnic identifiers. Lee is a wonderfully ambiguous surname, one that could be Asian (Ang), black (Spike), or white (Jennifer, director of Frozen). I left the choice of race to illustrator Elizabeth Buttler (elizabethbuttler.com), who decided to depict Jenna as Asian or part-Asian; Principal Young as Asian; Shorn L. Loop and Rolly Maloo as black; and all other named characters as white. There’s a video going around with a couple having an argument over what to have for dinner:

Sometimes you don’t know what you want until you encounter something you don’t want. I didn’t want to have to assign races in my text, but I wasn’t sure about Elizabeth’s choices either. The Rolly character is a popular and clever rich girl but also a weak math student and the co-instigator of the cheating. No race would be proud to claim her, so my visceral reaction was: “Default to white!” Which Elizabeth did with the other instigator Patty, perhaps the most evil of all the characters in the book (after her PTA princess of a mom). But Rolly is shown as black. Could we do this to black children? The MMS is a burden, yes, but it’s mainly a positive burden, like carrying a hundred-pound box of books around school. Black stereotypes are a five-hundred-pound bag of manure; I did not want to add to that. I asked my editor if it might it be better to have the strong math student (Jenna) be black or Latina; the weak-in-math and evil students (Rolly and Patty) be white and Asian; and the weak-in-math but kindhearted students be something else. If the chief instigator were Asian, wouldn’t that play into the very negative stereotype of Asians as cheaters (think “cheap designer knock-offs”)?

Midway through I asked: how about if everyone simply looked mixed-race, as we might in a few generations? I took the mixed-race route in Minn and Jake, not referencing Jake’s ethnicity at all in the first book, where it was irrelevant—but then identifying him as one-quarter Korean when introducing his Korean grandmother in the sequel. We decided that this would be too convenient here. Difficult as our choices were, it was better to make them.

In the end we all agreed that the villainous black (or possibly Indian?) Rolly Maloo was successfully offset by the courageous, spunky, funny hero Shorn L. Loop. Kids would hiss at (white) Patty but cheer for (white) Hugo. Asian Jenna, a math whiz, plays into the MMS but there are indeed many Asian children who are good at math.

If the whole process above sounds borderline ridiculous, you’re right; it felt that way at times. But only because this kind of conversation is still the exception. I wish that all authors, illustrators, editors, and art directors would start insisting on this kind of discussion before a single child is drawn. Even if a book’s characters are “default-white”—that, too, should be made as a conscious and reasoned choice. Let’s turn these stereotypes on their heads, a book at a time; talk is a good place to start.

Janet Wong (janetwong.com) is the half-Chinese, half-Korean, sometimes MMS-y, sometimes-not, half-poet, half-prose author of two dozen books including Me and Rolly Maloo, a Horace Mann Upstanders Honor winner. She is also the current chair of the IRA Notable Books for a Global Society (NBGS) committee.