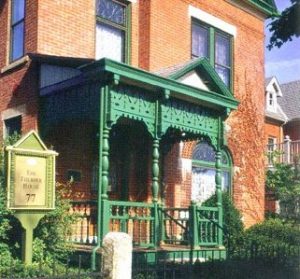 Thurber House is a non-profit literary center, located in the childhood home of author and cartoonist James Thurber. Each year, Thurber House hosts one talented author for a month-long retreat. The resident will have time for his/her own writing projects in addition to devoting up to 10 hours per week teaching writing workshops to children in a community-based program and as part of the Thurber House Summer Writing Camp.

Past Thurber Residents Include:

The deadline to submit an application is October 31, 2014. After interviewing select candidates, a decision will be announced by early January 2015.

More information about the program can be found here, and you can download an application here.

James Thurber was born in Columbus, Ohio on December 8, 1894. He is perhaps best known as the author of The Secret Life of Walter Mitty and the creator of several New Yorker magazine cover cartoons, though his work spanned many genres, including short stories, modern commentary, fiction, children’s fantasy and letters.