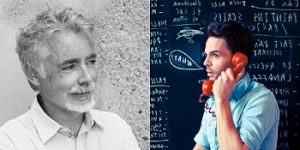 NEW YORK/LONDON – HarperCollins US and UK announced today the acquisition of IMAGINARY FRED, the first-ever picture book collaboration from the extraordinary team of Eoin Colfer and Oliver Jeffers.  Scheduled for publication simultaneously in the US and UK in Fall 2015, world rights were negotiated by Kate Jackson, Senior Vice President, Associate Publisher, and Editor-in-Chief, and Nancy Inteli, Editorial Director, HarperCollins US, and Rachel Denwood, Publishing and Creative Director, HarperCollins UK, with Sophie Hicks at Ed Victor Ltd. Oliver Jeffers is represented by Paul Moreton at Bell Lomax Moreton.

IMAGINARY FRED is a unique take on the concept of imaginary friends. It’s the story of two little boys and their shared love of movies, music, and comic books. It is about how a little bit of electricity, a little bit of luck, and a little bit of magic can spark a friendship like no other.  The perfect chemistry between Eoin Colfer’s text and Oliver Jeffers’s artwork will make for a treasured new picture book.

“We’re thrilled to help bring to life Eoin Colfer and Oliver Jeffers’s IMAGINARY FRED, a story that’s sure to become an instant children’s classic, with its unforgettable characters and clever storytelling,” says Kate Jackson.  “It’s filled with hilarity and heart, and we knew right away we wanted this dream team on our list.”

Rachel Denwood adds, “An Eoin Colfer and Oliver Jeffers collaboration is pretty much the stuff of dreams – they are simply two of the finest children’s book creators on the planet. IMAGINARY FRED is completely unique – it’s funny, poignant, original. It’s genius.”

Eoin Colfer is the internationally bestselling author of the ARTEMIS FOWL series as well as several standalone novels, including the highly acclaimed AIRMAN. Eoin was born, raised, and currently lives in Wexford, Ireland.

Oliver Jeffers is an outstanding talent and has won many high-profile awards, including the Nestlé Children’s Book Prize Gold Award, the Blue Peter Book of the Year, and the Irish Children’s Book of the Year. His most recent book is the New York Times #1 bestseller, THE DAY THE CRAYONS QUIT.  Born in Australia and raised in Belfast, Oliver now lives and works in Brooklyn, New York.

ABOUT HARPERCOLLINS CHILDREN’S BOOKS US

HarperCollins UK publishes a wide range of books, from cutting-edge contemporary fiction, to block-busting thrillers, from fantasy literature and children’s books to enduring classics. It also publishes a great selection of non-fiction titles, including history, celebrity memoirs, biographies, popular science, dictionaries, maps, reference titles and education books, and its digital business is thriving. With nearly 200 years of history, HarperCollins publishes some of the world’s foremost authors, from Nobel prize winners to worldwide bestsellers. In addition it publishes the works of Agatha Christie, JRR Tolkien and CS Lewis. It was the first major UK trade publisher to go carbon neutral in December 2007.