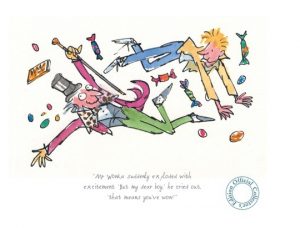 It turns out, another draft of the book contained a chapter called “The Warming-Candy Room” which features sweets that may cause an overzealous eater to erupt with heat. Vanity Fair published the lost chapter online, but only subscribers can have access to it. Donald Sturrock, the author who wrote an extensive Roald Dahl biography called Storyteller, credits Dahl’s literary agent Sheila St. Lawrence for helping him pare down the plot for that book.

“Her general rule to him was to remove things. The original story was a bit of a detective story; there were all sorts of different, crazy episodes. Sheila was largely responsible for encouraging Dahl to just focus on the fun of being in the factory and to flesh out the five main characters more, rather than having little cameos for 20 children.” (Vanity Fair)