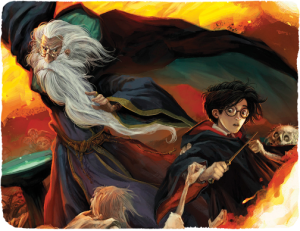 What were the findings? Not surprisingly, J.K. Rowling’s Harry Potter series captured the number one spot. Other children’s books that made it into the Top 20 include The Lion, the Witch, and the Wardrobe by C.S. Lewis, A Wrinkle In Time by Madeleine L’Engle, The Catcher in the Rye by J.D. Salinger, The Hobbit by J.R.R. Tolkien, and The Hunger Games trilogy by Suzanne Collins. (BuzzFeed)

“To answer this question we gathered a de-identified sample of over 130,000 status updates matching ’10 books’ or ‘ten books’ appearing in the last two weeks of August 2014 (although the meme has been active over at least a year). The demographics of those posting were as follows: 63.7% were in the US, followed by 9.3%in India, and 6.3% in the UK. Women outnumbered men 3.1:1. The average age was 37. We therefore expect the books chosen to be reflective of this subset of the population.” (Facebook)