Kyle Zimmer, Co-Founder and CEO of First Book, To Be Honored by the National Book Foundation as the 2014 Literarian Medalist 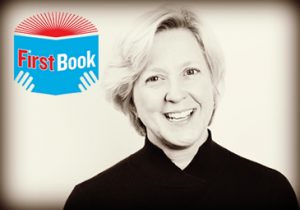 With Zimmer at the helm, First Book — a Washington, DC-based nonprofit social enterprise — has distributed more than 118 million new books to children in need.

Hundreds of thousands of people across the country have been touched by Kyle Zimmer’s vision that the barriers to reading should come down. Her work on behalf of readers has been exemplary and will have long-lasting effects.

Under Zimmer’s leadership, First Book has distributed more than 118 million new books to children in need.

New York, NY (September 3, 2014) – The National Book Foundation, presenter of the National Book Awards, will bestow its 2014 Literarian Award for Outstanding Service to the American Literary Community to First Book’s Kyle Zimmer at the 65th National Book Awards Ceremony and Benefit Dinner. The event will be held on Wednesday, November 19, 2014 at Cipriani, 55 Wall Street, in New York City.

Kyle Zimmer, co-founder, CEO, and president of First Book, will be honoredfor her outstanding leadership and achievements in overcoming childhood illiteracy and promoting educational equality. Internationally recognized as a visionary proponent of social entrepreneurship, Zimmer’s innovative business strategies have enabled the Washington, DC-based nonprofit social enterprise, First Book, to distribute quality, new books at little or no cost to millions of underserved children in communities throughout the United States and Canada, and starting in communities around the world.  First Book’s successes have resulted in demonstrable improvements in childhood literacy, as well as positive outcomes for schools and programs that receive First Book’s books and educational resources.

“Hundreds of thousands of people across the country have been touched by Kyle Zimmer’s vision that the barriers to reading should come down,” said the Foundation’s Executive Director, Harold Augenbraum. “Her work on behalf of readers has been exemplary and will have long-lasting effects.”

Born in Zanesville, Ohio, Zimmer attended the University of Iowa and graduated from George Washington University Law School. She worked as a corporate attorney for several years in Washington, DC while volunteering as a tutor for Martha’s Table, a multi-service community organization for the District’s families in need. Realizing that the children she was working with had no books to call their own spurred Zimmer to take action and in 1992, she and two friends founded First Book. To provide quality books to underserved children, Zimmer developed two groundbreaking models of social entrepreneurship: the First Book Marketplace, an award-winning, self-sustaining program that purchases new books from publishers and makes them available to educators and program leaders at affordable prices, and the First Book National Book Bank, which serves as the nation’s largest clearinghouse for new books donated by publishers. In addition, First Book’s market-driven Stories for All Project is serving as a catalyst to increase diversity in children’s books, so that all children can see themselves in books.

Driven by the commitment that all children deserve the very best, Zimmer has created solutions that focus on children in need and the educators that serve them, while creating new market opportunities for the publishing industry.  With Zimmer at the helm, and through collaborations with corporate and nonprofit partners and donors, First Book distributes millions of new books and educational resources every year to children from low-income families through a growing network of schools, programs, churches and institutions across the United States, as well as in Canada, Peru, Haiti, Jamaica, India and other countries. A passionate advocate for social entrepreneurship, educational equity, and the importance of literacy to further economic competitiveness and global understanding, Zimmer has participated in some of the world’s most prestigious economic forums. In 2013, Zimmer was a presenter at the University of Oxford’s “Power Shift:  Forum for Women in the World Economy” at the Saïd Business School at Oxford.  Zimmer and First Book were also featured at the 2013 Clinton Global Initiative. Zimmer was also a presenter and blogger at the World Economic Forum in Beijing in 2012, served as a member of the World Economic Forum’s Global Agenda Council on SocialEntrepreneurship, and was featured as a presenter at the World Economic Forum in Davos in 2010. Zimmer has won numerous awards and honors, including the Carle Honors Angel Award in 2009, the first ever American Marketing Association Nonprofit Marketer of the Year in 2008, and the Outstanding Social Entrepreneur of the Year in the United States in 2007 from the Schwab Foundation for Social Entrepreneurship. She currently serves as a member of the Board of Directors for Ashoka, which works to ensure that social entrepreneurs and their innovations continue to inspire a new generation of local change-makers. She also serves on the Youth Venture Board of Directors and as a member of the board for James Patterson’s ReadKiddoRead.

Nominations for the Literarian Award are made by former National Book Award Winners, Finalists, and Judges, and other writers and literary professionals from around the country. Final selections are made by the National Book Foundation’s Board of Directors.

For more information about the National Book Awards and Awards-related events, visit nationalbook.org.

The National Book Award is one of the nation’s most prestigious literary prizes and has a stellar record of identifying and rewarding quality writing. In 1950, William Carlos Williams was the first Winner in Poetry, the following year William Faulkner was honored in Fiction, and so on through the years.  Many previous Winners of the National Book Award are now firmly established in the canon of American literature, such as Sherman Alexie, Louise Erdrich, Jonathan Franzen, Denis Johnson, Joyce Carol Oates, and Adrienne Rich.