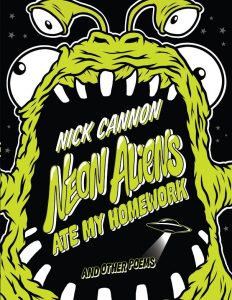 NEW YORK, NY — Scholastic, the global children’s publishing, education and media company, announced today that it will publish an illustrated poetry book for children by celebrity entertainer Nick Cannon in March 2015. “Neon Aliens Ate My Homework and Other Poems” will cover a diverse range of kid-friendly topics including funny, silly, gross, heartwarming, as well as serious poems, and will also include a number of illustrations created by Cannon himself. Additionally, the book for kids ages 7 and up will feature black-and-white illustrations by acclaimed street artists whose works have been shown around the world including Art Mobb (aka Michael Farhat), Califawnia (aka Fawn Arthur), Captain Kris(aka Kristian Douglas), Morf (aka Jack Fish), Queen Andrea (aka Andrea von Bujdoss), MAST, and Mike P. The publishing deal was developed by D. Christopher Jennings and Robert Caruso, founders of Impact Republic, Nick Cannon’s Ncredible Entertainment, and Debra Dorfman, Vice President and Publisher, Scholastic.

The inspiration for the book came from Cannon’s desire to combine the worlds of poetry and hip-hop—two major influences that have shaped him into the prolific artist he is today. Cannon explains, “Writing is at the center of everything I do as an artist. Doing creative writing—especially writing poetry—is when I felt the calmest and freest. As a kid, it was my escape from the inner-city pitfalls. The first important writer in my life was Shel Silverstein—he made me fall in love with writing and seeing his whimsical sketches got me interested in art. When I was eight years old, I got a spiral notebook and wrote my first poem/rap. I filled that notebook with poems, rhymes, jokes, and witty stories. I still keep one to this day. I hope that poems inNeon Aliens will help inspire kids to want to get out a pen and paper to write or draw their own thoughts, rhymes, and stories.”

This fall, Scholastic also will publish Cannon’s previously announced book, “Roc and Roe’s Twelve Days of Christmas,” a delightful and festive picture book featuring his twins Roc (Moroccan) and Roe (Monroe), illustrated by AG Ford to be released this November.

Nick Cannon is a multifaceted artist: film star, comedian, TV and radio host, musician, written, director, and philanthropist. He is best known as the energetic host of America’s Got Talent. People magazine called this California native one of the top-ten most successful young people in Hollywood. At the age of eight, Cannon began writing poetry and songs, and performing them for friends and family. Through what Cannon recalls as “a lot of trial and failure,” he recorded his first song at home on his boom box. At the age of eleven, Cannon started doing standup comedy, and by seventeen, he was performing at world-renowned comedy venues. That same year, he got his biggest break. He became a cast member on Nickelodeon’s sketch-comedy series All That. Cannon also wrote for the show, making him the youngest staff writer on Nickelodeon’s history. Cannon’s comedy experience culminated in the creation of The Nick Cannon Show, which earned him the first of many Kids’ Choice Awards—an award show that he later hosted several times. More recently, Cannon has released several music albums and is the creator, producer, and host of MTV’s Nick Cannon Presents: Wild ‘N Out, an improv-comedy show with musical performances.