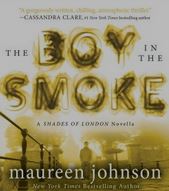 New York, NY — Putnam Children’s Books, an imprint of Penguin Young Readers Group, is pleased to announce the release of a new story by New York Timesbestselling author Maureen Johnson. Originally written for World Book Day UK, THE BOY IN THE SMOKE is a prequel to Johnson’s “Shades of London” series and will be released free-of-charge  in four parts over the next month on Wattpad, a social platform to discover and share stories.

THE BOY IN THE SMOKE takes place before THE NAME OF THE STAR, the first of the “Shades of London” series, and details the events that led to Stephen Dene developing the ‘sight’ that brought him to his unusual occupation as de facto leader of the Shades, London’s secret ghost-fighting police. A section of the short story will release every Monday for a month, beginning on August, 18th, till the story is published in its entirety.

Maureen Johnson is the New York Times bestselling author of more than ten young-adult novels, including 13 Little Blue Envelopes, The Last Little Blue Envelope, Devilish, The Bermudez Triangle, Let It Snow, and Suite Scarlett. Her work is published in twenty-one languages. Maureen spends a great deal of time online, earning her some dubious and some not-as-dubious commendations, such as being named one of Time Magazine’s top 140 people to follow on Twitter. Outside of YA, she worked with Electronic Arts as the screenwriter for the handheld versions of the Harry Potter and the Half-Blood Prince video game. She holds an MFA in Writing from Columbia University and divides her time between her home in New York City and a mysterious dwelling outside of London. You can find her online at www.maureenjohnsonbooks.com or on Twitter as @maureenjohnson.