‘Dear Malala, We Stand With You’ Picture Book to Be Published by Crown Books for Young Readers 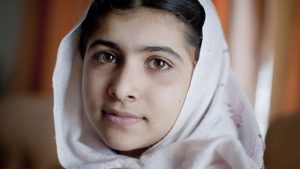 Written in the form of a photo-illustrated letter to Malala Yousafzai, two-time Nobel Peace Prize nominee, DEAR MALALA, WE STAND WITH YOU (by Rosemary McCarney and Plan Canada / Ages 4–8) is both a show of support and a call to action for girls around the world. Malala Yousafzai became the youngest person to ever be nominated for the Nobel Peace Prize after she survived being shot in the head by the Taliban for speaking out in favor of a girl’s right to an education. She has since emerged as an influential voice for social justice in the world. With powerfully simple language and stunning photographs, DEAR MALALA, WE STAND WITH YOU captures the impact Malala has had on girls from all walks of life.

DEAR MALALA, WE STAND WITH YOU shares a powerful story with the youngest of readers and creates an opportunity for family discussion around a very important topic,” says Easton. “We are so proud to be publishing this book at Crown Books for Young Readers.

On the first Malala Day, July 12, 2013, 500 young people from around the world came to the United Nations and “took over” for the day. As part of Malala Day, some young girls participated in a short film—in the form of their letters to Malala—sharing how important a symbol she is in their lives. Rosemary McCarney has excerpted from these letters and formed one continuous letter in DEAR MALALA, WE STAND WITH YOU. The book includes an excerpt from Malala’s UN speech and a “How You Can Help” page with suggested organizations to donate to, and campaigns to participate in.

In support of publication, Random House Children’s Books will make a donation to Plan International’s Because I am a Girl campaign, which aims to support millions of girls to get the education, skills, and support they need to transform their lives and the world around them.

Rosemary McCarney has over 20 years of international development experience and runs the Canadian operations of Plan International as President and CEO. Her skills and passion played a pivotal role in Plan’s nine-year Because I am a Girl campaign, which advocates for the right of every girl to an education.