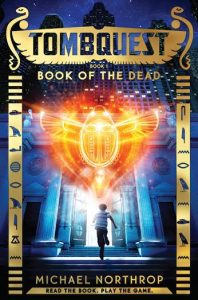 New York, NY – Scholastic, the global children’s publishing, education and media company and the pioneering publisher of the bestselling multi-platform properties The 39 Clues®, Infinity Ring® and Spirit Animals™, announced today that it will publish its next multi-platform series, TombQuest™,  simultaneously in the United States, United Kingdom, Canada, Australia and New Zealand in February 2015. The mystery of ancient Egypt comes to life in this thrilling action adventure spanning five spellbinding books by acclaimed author Michael Northrop and linked with an interactive online game. The first title, Book of the Dead, will launch in print and digital formats in February 2015, with the second book to follow in May 2015. The five-book series for readers ages 8-12 also will feature hidden puzzles and coded messages on the covers which kids can unlock to reveal key plot points.

There are currently more than 22 million copies of Scholastic’s industry-leading multi-platform books in print in the United States alone, and its vibrant online game community has more than 3 million registrations to date with the average user spending approximately 26 minutes online. In December 2014, the TombQuest online game (www.scholastic.com/tombquest) will launch in beta format. With TombQuest, Scholastic has developed its most viral game to date, built around the social and interactive concept of “create, play, and share.” Kids become the “game masters” as they design their own ancient Egyptian maze complete with treasure, traps and monsters, and challenge their friends to play. The highly engaging game is complemented by a safe and moderated online community where kids can chat about the books, write fan fiction, share the games they have built, and learn more about ancient Egypt.

“TombQuest is a thoroughly engrossing page-turner that hurtles its characters on a non-stop adventure through the mysteries of ancient Egypt,” said Ellie Berger, President, Scholastic Trade Publishing.

“With the online game, kids are encouraged to broaden their imaginations, create their own worlds, and share them with their friends. TombQuest is the culmination of everything we’ve learned to date and we look forward to reaching millions of kids worldwide with this immersive new reading experience.”

TombQuest follows two kids—Alex and his best friend Ren—who awaken the magic of ancient Egypt. When Alex’s mother uses the Egyptian Book of the Dead to save him, she cracks open a door to the afterlife accidentally unleashing five evil ancients: the Death Walkers. Alex and Ren must set off on an impossible quest that takes them around the globe—and into the afterworld—in order to save his mother and lay the Death Walkers to rest once and for all!

Since launching the groundbreaking The 39 Clues series in 2008, the first of its kind in publishing history, Scholastic has continued to innovate and solidify its stake on the multi-platform space with the launch of the New York Times bestselling Infinity Ring time travel adventure and the Spirit Animals fantasy series. Each of these multi-platform series is comprised of books in print and digital form, combined with fully integrated and immersive online games that extend the reading experience. There are currently more than 22 millioncopies of Scholastic’s multi-platform books in print, and more than 3 million registered online game users in all 50 states and 191 countries worldwide. The books have been translated into 28 languages.

Michael Northrop’s debut novel, Gentlemen, earned him a Publishers Weekly Flying Start, and his young adult thriller, Trapped, was published in 2011 to great acclaim. His first middle grade novel, Plunked, was named one of the best children’s books of the year by the New York Public Library and was an NPR “Backseat Book Club” selection. Northrop worked as an editor at Sports Illustrated for Kids for many years, and he now writes full-time from his home in New York City. Visit him online at www.michaelnorthrop.net.