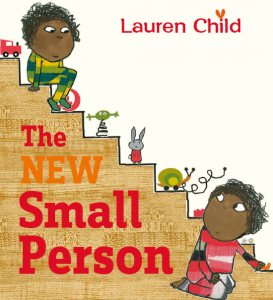 The New Small Person introduces readers to Elmore Green, who started life as an only child, as many children do. He had a room all to himself, and everything in it was his. But then one day, everything changed. . . . Told with Lauren Child’s trademark wit, humor, and style, this original take on the arrival of a new sibling is Lauren Child at her absolute best.

Lauren Child burst onto the children’s book scene in 1999 and has since published many best-selling and award-winning books, including the hugely popular Charlie and Lola, Clarice Bean, and Ruby Redfort series. She has won numerous awards, including the prestigious Kate Greenaway Medal, the Nestlé Children’s Book Prize, and the Red House Children’s Book Award. Her books have been made into an award-winning TV series and have sold in many languages with runaway success, selling more than 3 million copies around the world.

About Candlewick Press
Candlewick Press is an independent, employee-owned publisher based in Somerville, Massachusetts. For over twenty years, Candlewick has published outstanding children’s books for readers of all ages, including books by award-winning authors and illustrators such as the National Ambassador for Children’s Literature, Kate DiCamillo, M. T. Anderson, Jon Klassen, and Laura Amy Schlitz; the widely acclaimed Judy Moody, Mercy Watson, and ’Ology series; and favorites such as Guess How Much I Love You, Where’s Waldo?, and Maisy. Candlewick is part of the Walker Books Group, together with Walker Books UK in London and Walker Books Australia, based in Sydney and Auckland. Visit Candlewick online at www.candlewick.com.