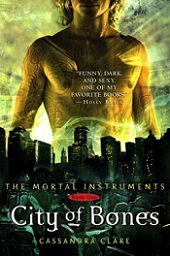 NEW YORK, NY — Simon & Schuster Audio is proud to announce that actress Mae Whitman will narrate a new edition of CITY OF BONES by bestselling author Cassandra Clare. The audiobook will be available on April 15, 2014 as an unabridged digital download.

Whitman currently stars as Amber Holt in the award-winning TV series Parenthood. She is also known for her roles as Ann Veal in the critically-acclaimed TV series Arrested Development and as Roxy Richter in 2010 film Scott Pilgrim vs. the World.

Clare is the author of the New York Times, USA Today, and Wall Street Journal bestselling Mortal Instruments series andInfernal Devices trilogy. Her books have more than 24 million copies in print worldwide and have been translated into more than thirty-five languages. CITY OF BONES is the first installment in The Mortal Instruments series; the film version debuted inAugust 2013 starring Lily Collins, Jonathan Rhys Meyers, Jamie Campbell Bower, and Lena Headey.

“Mae is an incredibly gifted actress,” says Clare, “and I can’t wait to hear her bring CITY OF BONES to life.”

In CITY OF BONES life changes drastically for fifteen-year-old Clary Fray when she witnesses a murder committed by three teenagers covered with strange tattoos and brandishing bizarre weapons. Soon she is introduced to the world of the Shadowhunters, a secret cadre of warriors dedicated to driving demons out of our world and back to their own. When mother is abducted by evil forces, Clary learns that she descends from a line of these warriors and must join forces with them to save her mother and the world as they know it.