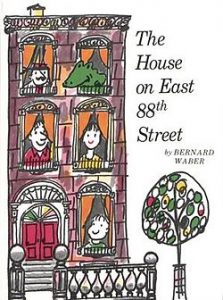 The children of the Yorkville Community School (421 E 88th St, New York, NY 10128) will gather to celebrate Children’s Book Week (May 12-18th, 2014) by helping declare their school and the street where it stands a Literary Landmark.  The street was made famous by children’s author/illustrator Bernard Waber in his book The House on East 88th Street.  The 1962 book, published by Houghton Mifflin Harcourt, introduced the character Lyle, the Crocodile to the world of children’s literature. The story is about a family named the Primms who move into an old Victorian brownstone, only to find a performing crocodile named Lyle living in the bathtub.

A United for Libraries bronze Literary Landmark plaque will be unveiled during the ceremony.  It will later be mounted on the exterior of the Yorkville School, which is similar to the school that the Primm children attended. A costumed character of Lyle the Crocodile will be in attendance and will be available for photo opportunities.

Bernard Waber (1921-2013) was the creator of more than thirty books for young readers. In 1955, Mr. Waber and his family moved from their native Philadelphia to New York, a city “they loved at once.”   In addition to his books about Lyle the Crocodile, Mr. Waber is the creator of the beloved Ira Sleeps Over (1975) and Courage (2002).

United for Libraries – is a division of the American Library Association that supports those who govern, promote, advocate, and fundraise for libraries.

Children’s Book Week – is the longest-running national literacy initiative in the country. It is administered by Every Child A Reader & sponsored by the Children’s Book Council.