14 Books for Children & Teens About the Freedom Summer of 1964 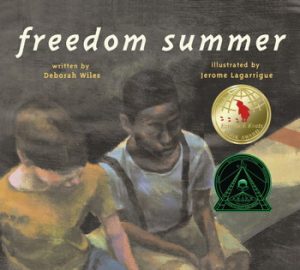 The “Freedom Summer” of 1964 was a pivotal moment in the civil rights movement. This year marks the 50th anniversary of the landmark year in American history.  Here is a list of 14 children’s books that deal specifically with the remarkable events of 1964 – and 3 additional books specifically for teachers and librarians. Thank you to the following for their invaluable input: Celebrating the 50th Anniversary of the Freedom Summer

Friendship defies racism for two boys in this stirring story of the “Freedom Summer” that followed the passage of the Civil Rights Act of 1964. Now in a 50th Anniversary Edition with a refreshed cover and a new introduction. In this triumphant story based on the 1964 Mississippi Freedom School Summer Project, that celebrates the strength of a people as well as the bravery of one young girl who didn’t let being scared get in her way. Illustrated by E. B. Lewis

Though not specifically about the 1964 Freedom Summer, this award-winning book also deals with the themes of segregation, friendship, and fairness. It’s the summer of 1964 in a small Mississippi town, and Glory, who’s about to turn twelve, wishes she could turn back the clock. Everyone is riled up about the town’s segregated pool. Portraits that celebrate the lives of ten bold women freedom fighters of the civil rights movement including Dorothy I. Height founder of “Wednesdays in Mississippi”. It is 1964, and Sunny’s town, Greenwood, Mississippi, is invaded by outside “agitators.” Everyone has been choosing sides, and Sunny learns how scary it can be to get involved.

This contemporary coming of age tale involves an oral history project in which the protagonist and her friends get to know several activists who had established a Freedom School in 1964. The year is 1964, and Alice Ann Moxley’s FBI–agent father has been reassigned from Chicago to Jackson, Mississippi. Alice finds herself thrust into the midst of the racial turmoil that dominates current events, especially when a black girl named Valerie Taylor joins her sixth-grade class.

A Dream of Freedom Pulitzer Prize–winning author Diane  McWhorter gives a photographic overview of the events that Occurred between 1954 (the year of Brown v. Board of Education) and 1968 (the year that Dr. Martin Luther King, Jr. was assassinated). A look at the brutal murders of James Chaney, Andrew Goodman, and Michael Schwerner in 1964, through to the conviction in 2005 of mastermind Edgar Ray Killen.

Freedom Summer: The 1964 Struggle for Civil Rights in Mississippi This riveting account of the murder of three civil rights crusaders in Mississippi offers new interviews with volunteers from that fateful summer and many never-before-seen photographs.

We Are All Welcome Here: A Novel It is the summer of 1964. In Tupelo, Mississippi—as tensions are mounting over civil-rights demonstrations occurring ever more frequently and violently-across the state—three women struggle against overwhelming odds for her own kind of freedom.

Fourteen-year-old Emily, her mother, and her grandmother Ola take turns narrating their stories, revealing the hardships ­including the lynching of Ola’s husband in 1964 Alabama­ that have made them strong.

The Secret Life of Bees

Lily Owens is growing up in South Carolina in the mid-1960s, raised by her cruel father but cared for by Rosaleen, her African-American nanny.

An Idea Whose Time Has Come: Two Presidents, Two Parties, and the Battle for the Civil Rights Act of 1964

A top Washington journalist recounts the dramatic political battle to pass the Civil Rights Act of 1964, the law that created modern America, on the fiftieth anniversary of its passage

Ghosts of Mississippi: The Murder of Medgar Evers, the Trials of Byron De LA Beckwith, and the Haunting of the New South

Possibly out of print –An in-depth examination of a noted civil rights case involving the murder of an NAACP official and his white supremacist killer’s three trials draws comparisons between the case and the racial climate in the Deep South.

The Bill of the Century

The Epic Battle for the Civil Rights Act